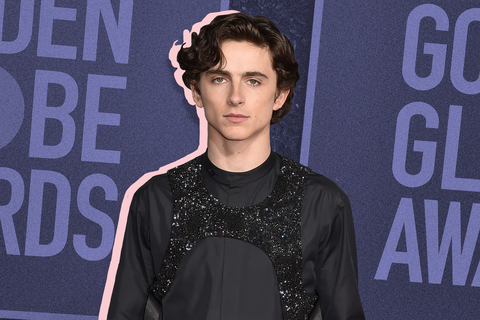 Hello and welcome back to another edition of This Week in Timothée Chalamet. I have not seen the TimCha fandom so divided over one of Timmy’s sartorial choices since his The King haircut debuted at Toronto International Film Festival (#neverforget). But his Golden Globes bespoke Virgil Abloh for Louis Vuitton harness, which was actually an “embellished bib,” was the look of the night, even stealing Gaga’s thunder and thereby probably putting Timmy’s life in danger.

(I’m not saying that Lady Gaga demands attention, I’m just saying that there can be 100 people in a room and 99 of them don’t believe in you, but if just one of them gets tweeted about more than you at an awards show then they’re your actual nemesis.)

For what it's worth, I am so pro-This Look that when I saw him on the red carpet I nearly passed out from delirious thirst. (I also speculated about what he could be doing after the Globes for this very website. Timmy is my beat!)

There’s probably more to talk about (?), so lét’s get to it:

Here are the best tweets about Timmy’s harness/bib.

People had a lot of thoughts, and I’d be remiss not to select a few excellent observations.

Same, I actually only recently awakened from my coma.

don’t talk to me about anything other than timothee chalamet’s harness for the next 24 hours pic.twitter.com/Y69RP05vJp

Obviously, you meant “for the next week” and here we are.

Timothee Chalamet in a harness ✨ pic.twitter.com/CWkCnzV5Sy

I know, sweetie. I know.

Speaking of the Globes, Timmy brought his mother as his date (and she looked foine, if I may say!) and they got interviewed by an Access Hollywood reporter who asked him whether he was meeting up with Lily-Rose Depp after the awards. He got flustered and said, “I’m here with Mom!” His mother, asked whether she approves of the union, also shied away and said, “I approve that he’s here with me!”

Here’s video of the interaction:

Couple things: First, can Mrs. Chalamet adopt me? She seems so great. Then again, it would be weird to thirst after my adoptive brother, right? Or would it be kind of hot, in a forbidden, Flowers in the Attic-way?

Second, this kind of interaction is the embodiment of my worst stress dreams: Having to ambush reluctant, nervous celebrities about what they’re wearing on live television, completely on the spot, and every time you mess up even a little it will probably make news. Literal nightmare.

Third, Timmy why are you being so coy about Lily-Rose?! We have seen you two smoochin’ all over the western world, bb! But Us Weekly points to a quote he gave last January regarding his love life, in which he said, “Date is very much a scary word, because then that context has been established. You can always see people on early date behavior.”

That sure sounds like some serious fear of commitment, TimmyTim! Hopefully he's reformed in time to get into a relationship with Miss Depp, but I’ll just say this: It’s a good thing fuccbois are kind of my type.

There is more Dune news!

I reject this, but did you know that there are people with whom we share the planet that, when they hear Timmy’s name, say, “Wait, who is that?” I learned over the holiday break that I am, unfortunately, related to some of them. Fortunately, biology isn’t destiny and I guess their response isn’t totally surprising: Timmy has largely starred in independent movies that got (at least initially) somewhat limited releases.

But that is definitely going to change when he stars in the probably-going-to-be-massive Denis Villeneuve–directed remake of Dune. As we already know, Timmy will play the lead, Paul Atreides.

And now we have news that the villain, Baron Harkonnen, will be played by none other than Stellan Skarsgård—the man whom, when presented with two other options for my would-be biological father, I would pick every time.

This is shaping up to be quite the production, although that may be just in comparison to David Lynch’s disastrous 1984 movie which, as I just said, was disastrous.

Anyway, that’s the news. Have a beautiful wéekend.