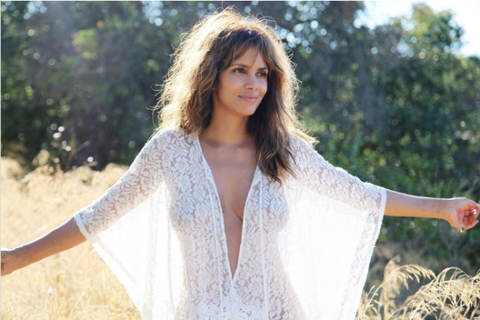 In March, Halle Berry posted an Instagram of herself with her arms spread wide and this caption: "Me when someone says 'I'm coming over and I've got snacks.'"

Almost immediately, fans lost their minds over the fact that the actress is not only a snack fan, but also a 50-year-old snack fan who looks amazing. Just look at her!

Me when someone says "I'm coming over and I've got snacks."

We decided to do some digging to find out exactly what the actress does to stay stunning.

Her diabetes diagnosis changed everything.

Berry was diagnosed with diabetes when she was 19 years old. After several years of "scary situations" and not understanding the condition, Berry learned that she had to make some serious lifestyle changes for the good of her health. So the actress cut processed sugars and bread from her diet and now sticks to a healthy diet, which includes eating plenty of veggies and drinking lots of water, she told the L.A. Times.

"My diet is geared towards managing my diabetes, so I try to eat four small meals a day. I like to feel strong and healthy," Berry told Women & Home South Africa.

It's time for #HBbooksfrombed. SIMPLE is the easiest cookbook in the world. No recipe has more than 4 steps or 6 ingredients. If you are at all like me and you enjoy food, but don't have the time to cook, this is the book for you. This unique book offers recipes that will appeal to almost everyone. As a mom, it's often hard for me to find meals that are healthy, but also inspire my kids to try new things. This book is packed with meals that will delight both young and old and they really are SIMPLE! You can make cheese puffs to BBQ spare ribs to baked John Dory with lemon sauce! Give it a try, you won't be disappointed!

Her diabetes-friendly meal plan focuses on foods that are low in fat, sugar, and processed carbohydrates. Her favorite meals are simple-yet-tasty healthy staples, like grilled tuna and garlic mashed potatoes, she told the Daily Mail.

"I started to eat loads of wonderful fresh vegetables, chicken, fresh fish, and pasta. I cut out red meat and cut back on fruit because it can contain quite a lot of sugar," Berry said.

She avoids sugar (and so do her kids).

Berry knows the problems sugar can cause for her system and her skin, even referring to it as "poison," according to Marie Claire UK. She uses sugar substitute Xylitol for herself and her two kids (daughter Nahla, 9, and son Maceo, 3), and the kiddos primarily stick to a healthy meal plan, too, just like Mom!

"It's rough though because [Nahla] is at a friend's birthday party every other month and there are all these wonderful birthday cakes, so I don't deprive her from that," Berry said. "I strongly believe in talking about nutrition at an early age and setting a good example."

She drinks protein shakes to keep her energy up.

When the actress is busy on set, she needs something to keep her energized. Berry isn't a fan of our favorite technique (though we love her choice): "I am not a napper; I wish I could nap. Adding vegetable protein to a shake sustains my energy throughout the day," Berry told the L.A. Times.

She keeps track of what goes into her body.

Working on myself, by myself, for myself.

Berry is basically the spokeswoman for healthy aging, but she acknowledges the challenges of getting older.

"It's a lot harder than it used to be," she told the L.A. Times. "As I get older, I am more conscious of what I eat." (Like making sure her diet is packed with fresh veggies, chicken, fresh fish, and more low-fat goodies!)

She exercises a ton.

Being in London makes me miss my workout buddy @natbardonnet 💪🌊

With every film role and paparazzi photograph that emerges of Berry, you can't help but wonder: How on Earth does she manage to stay in such great shape?

"I have never worked out with a lot of weights unless I had to for a film role. Left to my own devices, I just do cardio. I do exercises that involve my own body weight, because I never want to get too muscly," Berry told the L.A. Times. "I am diabetic, so exercising has always been a part of managing my disease and keeping my sugars under control."

The star's trainer, Nat Bardonnet, told Healthista that her training regimen "sculpts women into a sexy femme fatale, curvy but toned." We'd say being a Bond girl solidified her standing there!

She focuses on toning her abs.

As if we needed reminding, Berry has insane abs, so it's no secret that she focuses on her core three times a week during her 30-minute training sessions with Bardonnet. The trainer explained how the actress can handle any "curveball" workout that Bardonnet throws at her, and she'll do so with a smile.

"Her abs look amazing,"Bardonnet told People. "The way I push Halle, not many people would be able to last. She always has great energy and a great smile. She always stuns me how beautiful and sexy she looks."

We'll have what she's having.