We interrupt your weekday with an extremely adorable revelation: Prince William styles his daughter Princess Charlotte's hair. The father of three bonded with another dad about the struggles of playing parent-turned-hairdresser during his visit to Blackpool with wife Kate Middleton today, People reports.

Apparently, William learned the ropes on hairstyling from watching YouTube tutorials, but he still has trouble mastering one basic 'do with his three-year-old. "Never try to do a ponytail!" he said. "Nightmare."

Duchess Kate even quizzed her husband's hairdressing skills. "Have you tried to do a plait [braid]? It’s the weaving…really hard," she asked, per People.

"I can do [Charlotte’s] ponytail, but that’s about it as I don’t have enough hair to practice on!" William answered.

Can the Duke of Cambridge please start a YouTube channel and vlog about his attempts to give Princess Charlotte different hairstyles? We can already picture it: He's putting a scrunchie in her hair with intense focus in the kitchen in the morning before preschool starts. His and Kate's five-year-old son, Prince George, runs past the camera in a mischievous cameo. Their youngest, 10-month-old Prince Louis, coos in the background in a high chair. This is the content we deserve!

In addition to chatting about pampering their kids, the duke and duchess' trip to Blackpool today entailed visiting "innovative projects focused on investment and regeneration" and learning about how they tackle social and mental health problems faced by British people, Kensington Palace announced.

The Cambridge children make public appearances much less frequently than their parents do (the last time we saw George and Charlotte out and about was at Princess Eugenie's wedding in October), but we have our fingers crossed that the princess' next cameo involves a hairdo personally done by her dad. 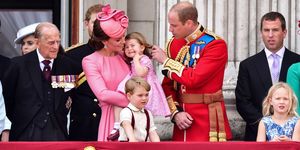 Prince William: Charlotte "Will Be Trouble"
The Nickname Charlotte and George Have for William

Erica Gonzales Erica Gonzales is the Culture and Content Strategy Editor for BAZAAR.com, where she oversees news and culture coverage, including celebrity, music, TV, movies, and more.
This content is created and maintained by a third party, and imported onto this page to help users provide their email addresses. You may be able to find more information about this and similar content at piano.io
Advertisement - Continue Reading Below
More From The Ultimate Guide to the Royal Family
The Queen Fired a Nanny Who Tried to Overrule Her
Harry & Meghan Want to Go Back to the UK This Year
Advertisement - Continue Reading Below
The Queen Is Apparently an Anti-Foodie
Harry Looked Regretful During Time 100 Interview
The Queen's Dining Room Has a Secret Button
Meghan Could "Seriously Consider" Running for Prez
The Palace Just Subtly Shaded Prince Harry
Harry Plans to Fly Archie Around in a Helicopter
Harry & Meghan's Speaking Demands Could Cost Them
Will & Kate Skipped Harry's Birthday Zoom Call