Today's Top Stories
1
Can Tayshia Adams Steal You For a Sec?
2
Texas DV Shelter Destroyed by the Winter Storm
3
'This Close to Okay' Is Our March Book Club Pick
4
What I Wear to Work: Leah Lizarondo
5
People Have a Lot of Feelings About 'I Care a Lot'
SplashNews.com

Yesterday, while we were all busy focusing on Kate Middleton hanging out with the Queen and Prince Charles, frolicking shirtless on a beach, Prince Harry and Meghan Markle made a surprise engagement that flew surprisingly under the radar (you know, by Harry and Meghan standards, at least).

The Duke and Duchess of Sussex stepped out on Tuesday afternoon to honor the victims of the terrorist attack in Christchurch, New Zealand. The couple donned all black and signed a book of condolences for the victims during an unexpected appearance at New Zealand House in London. Friday's attack was devastating, with 50 people losing their lives and dozens more sustaining injuries when a gunman opened fire on two mosques.

The couple, who visited New Zealand as part of their first royal tour as husband and wife last fall, also left flowers for the victims and signed the condolence book, writing, "Our deepest condolences. We are with you." Harry also signed "Arohanui" with his name, which, as People reports, is Maori for "best wishes."

Related Stories
How to Support the NZ Shooting Victims 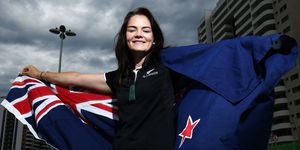 Post-Trump, Americans Are Moving to New Zealand
Kayleigh Roberts Contributor Kayleigh Roberts is the weekend editor at Marie Claire, covering celebrity and entertainment news, from actual royals like Kate Middleton and Meghan Markle to Hollywood royalty, like Katie Holmes and Chrissy Teigen.
This content is created and maintained by a third party, and imported onto this page to help users provide their email addresses. You may be able to find more information about this and similar content at piano.io
Advertisement - Continue Reading Below
More From Celebrity
Celebs That You Forgot Were on MTV Shows
The Best TV and Movie Wedding Dresses of All Time
Advertisement - Continue Reading Below
47 'Friends' Facts Every Superfan Should Know
40 Celeb Exes Who Worked Together After a Breakup
35 Unforgettable Royal Wedding Scandals
The 50 Most Popular Episodes of ‘Friends,’ Ranked
Iconic Party Photos From the Past