Today's Top Stories
1
Priyanka Pulls Back the Curtain
2
Leather Skirts Are an Edgy Wardrobe Must-Have
3
Could This Be the Last Year of Roe v. Wade?
4
'Detransition, Baby' Is Our Feb Book Club Pick
5
Keira Knightley Won't Do Nude Scenes Filmed by Men
HBO

Game of Thrones has a reputation for killing off beloved (and not-so-beloved) characters. It also, in recent seasons at least, has a reputation for being like, "PSYCH!" and bringing them back from the dead (or, as in the case of The Hound, from the presumed-dead). The latest GOT zombie character seems to be none other than Stannis Baratheon—although it remains to be seen if he'll be a literal zombie (you know, of the icy, ambling down past The Wall to kill all of humanity variety) or just a figurative one (see The Hound reference above).

So, where does this latest bit of intel come from? For once, it's not just fans reading into a single frame from the trailer on Reddit. Nope, this is straight from actor Stephen Dillane's Wikipedia page, which says that he will be back as Stannis in Season 8.

Specifically, please direct your attention to the dates listed for the role:

Or, at least, we thought he died. In case you need a refresher (which, fair, it was four years ago), when we last saw Stannis, he was sitting on the ground in a forest, about to be beheaded by Brienne of Tarth, who was loyal to his baby brother, Renly Baratheon, who Stannis assassinated via smoke monster back in season 2 (remember that?).

A refresher on Stannis Baratheon's death:

Now, we don't actually see Stannis' head roll from his corpse, but the implication was definitely that Brienne was ready to kill Stannis. She formally sentenced him to die, she did the whole "in the name of Renly, first of his name" spiel. She even asked if he had any last words. And Stannis didn't even try to talk his way out of it. His last words were, "Go on. Do your duty."

The "death" scene ends on Brienne lifting her huge, Valyrian steel sword and we see, from Stannis' POV, as she brings it down in a very "I'm cutting a head off right now and avenging my fallen king" kind of motion.

So, has Stannis really just been alive this whole time?

No, we don't technically see Stannis die, so there is room for a Hound-esque gotcha moment here. But that would require us to believe that, at the last second, Brienne decided that, instead of killing Stannis, she would forsake her vow to avenge Renly's death.

This, however, would be a big leap for a few reasons:

Not only was Brienne, who is known for nothing so much as her fierce, almost pathological loyalty, sworn to Renly and fully Team Renly-Is-the-Rightful-King-of-Westeros, but she was also the main witness to the Stannis-faced smoke monster murdering him.

She was also wrongly accused of Renly's murder and almost killed by his guards for it and forced to run around sounding like a crazy person when she insisted that she didn't kill Renly, because it was the smoke monster who looked like his brother who did it. As a result, Brienne has been out for Stannis' blood since more or less the moment we met her and the idea of her leaving him alive just doesn't make sense.

But wait, you might be thinking. Maybe we'll find out that she pulled an Arya Stark and left him there to die a slow, painful death of his battle wounds instead of doing the merciful thing and beheading him.

Again, this just doesn't seem likely, if we're staying at all true to Brienne's character.

Arya's decision to leave The Hound for dead instead of killing him outright could be explained by a number of factors. She had been traveling with him for months and had maybe grown to like him a little, in spite of his place on her kill list, so maybe she didn't want to be the one to end it. She's also a shady, assassin-style killer, not a play-by-the-rules-of-honor knight like Brienne. There is nothing in Arya's established moral or ethical compasses to suggest she would have a problem with letting an enemy bleed out slowly instead of killing them humanely. Literally everything we know about Brienne, on the other hand, tells us the exact opposite.

Still, if Stannis is really back in Season 8, the best possible bet is that Brienne lost of her resolve for some reason and allowed Stannis to live and he's just been scampering through the northern woods for two seasons, regaining his strength (and probably running in to Melisandre on her way south after Jon banishes her at the end of Season 6).

If the show goes this route, the explanation will probably be something to do with the fact that, before Brienne runs into him, Stannis was fighting to retake the North from Ramsey Bolton, which would have also meant saving Sansa Stark, whom Brienne was sworn to protect.

Okay, but if Brienne did kill Stannis, then how is he back in Season 8?

There are a few options here. First, Stannis could be a literal zombie character. Maybe the White Walkers found him somehow. Maybe he's weirdly half-dead like Benjen Stark (although, south of The Wall, neither of those options are especially likely). Maybe he was dead but Melisandre comes across his body when she's leaving Winterfell and magics him back to life. Maybe there's a new magic we don't know about yet. Lots of maybe in the "ressurrected Stannis" column.

What seems more likely, if Brienne did in fact kill Stannis at the end of Season 5, is that his Season 8 appearance will take the form of a flashback or weird Bran vision quest moment or something. We'll have to wait until the show comes back, of course, to know for sure.

For what it's worth, George R.R. Martin says Stannis is alive in the books.

After Stannis' apparent demise at the end of Season 5, A Song of Ice and Fire author George R.R. Martin went on the record saying that Stannis isn't dead in the books. When asked about Stannis' status very directly during a Livejournal Q&A with fans, Martin wrote, "In my books? Alive beyond a doubt." 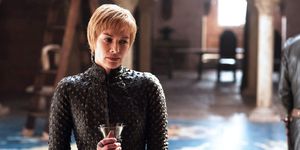 Did This Season 1 'GOT' Speech Predict the Finale?

Kayleigh Roberts Contributor Kayleigh Roberts is the weekend editor at Marie Claire, covering celebrity and entertainment news, from actual royals like Kate Middleton and Meghan Markle to Hollywood royalty, like Katie Holmes and Chrissy Teigen.
This content is created and maintained by a third party, and imported onto this page to help users provide their email addresses. You may be able to find more information about this and similar content at piano.io
Advertisement - Continue Reading Below
More From Celebrity
Megan Thee Stallion’s Hottie Bootcamp Is Intense
Katie Holmes' Mango Puffer Coat is a Winter Staple
Advertisement - Continue Reading Below
Kate Rewore Her Favorite Festive Tartan Dress
Kate and Charlotte Hunt for Spiders Together
Princess Diana's Nieces Opened Up About Their Aunt
Elizabeth Hurley, 55, Shows Off Toned Abs On Insta
Keira Knightley Won't Do Nude Scenes Filmed by Men
Kourtney Kardashian Is Dating Travis Barker
Priyanka Chopra Jonas Talks Her New Memoir
Priyanka and Nick on Their Quarantine Quality Time