It’s a big week for the Kardashians: Kim Kardashian West and husband Kanye West welcomed their fourth child into the world. Following the big reveal from Kourtney Kardashian on last Thursday night’s Ellen Show that their surrogate had gone into labor, the superstar couple took to Instagram the following Friday to proudly announce that they’d named their new baby boy Psalm West.

And, in true Kardashian style, they’ve selected a showstopping name that no one could have predicted. Following older siblings North, Saint, and Chicago, each with an impressive and unusual name, their newest son has been called Psalm. Pretty lovely, right? If not potentially a little confusing.

Kim shared the news with a screenshot of a text exchange with Kanye, presumably sent on Mother's Day. She captioned it simply, "Psalm West."

It’s a long-standing tradition for Kim and her sisters to choose names for their children that carry a hidden meaning, so where exactly did she and Kanye take inspiration for Psalm?

Psalm follows in a long line of hidden meanings for the Kardashian kids. While all the sisters, as well as momager Kris, all share names beginning with the letter ‘K’, the family decided not to carry that trend any further down the line. Kourtney was the first to buck the "K" expectations, choosing Mason Dash for her oldest son, before later giving birth to Penelope Scotland and Reign Aston. Across on the family tree, you’ll also find Kylie Jenner’s daughter Stormi, and Khloe Kardashian’s baby girl, True.

For Kim and Kanye, baby names have always been significant and personal choices. Eldest daughter North was a surprise choice, having originally just been a rumored name created by fans which Kim wasn’t a huge fan of. The reality star has since revealed: “Anna Wintour came over… She told us 'North is a genius name.' Kanye and I looked at one another and just laughed. I guess at that point it sort of stuck.”

Saint was thought to be a more poignant choice for the couple, who had been referring to their second baby as a “blessing” throughout a difficult and complicated nine months of pregnancy for Kim.

When Kim and Kanye announced their third child's name was Chicago, fans were left to guess at the real meaning—but it does make sense, considering Kanye grew up in the South Side of Chicago. Others have theorized the name could be a tribute to his late mother Donda, who passed away suddenly at 58. Kimye has yet to confirm the real reason behind Chi's name.

As for Psalm, it's clear that this is a nod to the couple's religious leanings. They may have been particularly inspired by the growth of Kanye's Sunday Services, a weekly service where he performs gospel versions of older hits. It's clearly a family affair—even North has performed, and several of the Kardashians regularly attend.

Kanye has said that his favorite app is his Bible app, and Kim told Vogue that although her family is low-key about it, religion means a lot to them. “We don’t share it much, but we’re really religious," Kardashian explained to Vogue. She added:

We start our day with a group chat with a Bible verse from my mom, and everyone chimes in on the meaning of it. We are very Christian—and our work ethic and our discipline comes from so many years at Catholic school.

Welcome to the world, Psalm. With a name like that (and a family legacy like that), we’re expecting big things. 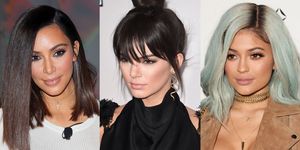 14 Times the Kardashians Fooled Everyone with Wigs
Lucy Wood Contributor Lucy Wood spends most of her time writing about celebby things, reading books, and waiting for the glorious day that she have enough millions for a pet sloth.
This content is created and maintained by a third party, and imported onto this page to help users provide their email addresses. You may be able to find more information about this and similar content at piano.io
Advertisement - Continue Reading Below
More From Celebrity
Lady Gaga Wears Athleisure and Platform Shoes
Meghan Markle Possibly Shared a Photo of Lilibet
Advertisement - Continue Reading Below
The Kardashians' Most Body-Confident Nude Shoots
What Happens on Katie's Season?
Britney Spears Says She Was Locked in a Bathroom
Kate and William Holiday In Cornwall
Blake Lively Wears a Pink Sequin Dress
Meghan Markle Hangs Out With Melissa McCarthy
Simone's Boyfriend Sent Her the Sweetest Message
Rebel Wilson Recreated This Britney Spears Look