It wouldn't be unreasonable to assume Bruno Mars has been staying up late watching too many Netflix marathons, after the singer was caught falling asleep in the crowd at the BET Awards. Oops.

Last night saw the Black Entertainment Television Awards ceremony play out at the Microsoft Theatre in Los Angeles, where stars from the music, sports, television, and the movie industry were celebrated for their achievements.

And as well as picking up the gong for Best Male R&B and Pop Artist, Bruno is making headlines for a different reason, after seemingly falling asleep in his seat on live TV. The poor little lamb just wanted to rest his eyes.

As you can imagine, the move didn't go unnoticed, and eagle-eyed fans were quick to spread the footage all over Twitter.

Here are some of the best reactions:

Apparently it was during Mary J Blige and ASAP Rocky's performance that Bruno had a little power nap—but presumably he meant no shade, right? 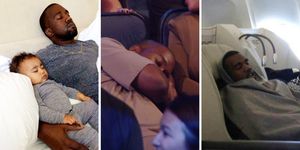