Today's Top Stories
1
PSA: Anthropologie Is Having a Sale All Weekend
2
Untangling Hair Bias
3
I Started a Company to Pay My Medical Bills
4
Doutzen Kroes Goes Behind the Scenes at Dior
5
The Best Friends Having Babies Together
Kim Kardashian/Snapchat

In case you haven't had enough Kardashian controversy for one summer, here's another one to drop in the bucket: Kim just shut down rumors that one of her recent Snapchats includes visible cocaine. In a series of Snapchats posted Monday, Kim goes through some new looks from the Kardashians' line of children's clothing, and in one of the shots, you can see a couple of powdery lines on a table behind her (see circled area above). 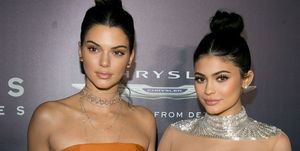 This being the internet, the powdered area didn't go unnoticed, and a follower asked Kim in a since-deleted tweet if the substance was cocaine. "I do not play with rumors like this so I'm gonna shut it down real quick," Kim replied. "That's sugar from our candy mess from Dylan's candy shop."

Kim and her family are noted fans of Dylan's Candy Bar, and according to TMZ, spent $200 there in one 2016 trip.

I do not play with rumors like this so I'm gonna shut it down real quick. That's sugar from our candy mess from dylan's candy shop https://t.co/oICdPQVi8d

Eliza Thompson senior entertainment editor I’m the senior entertainment editor at Cosmopolitan.com, which means my DVR is always 98 percent full.
Advertisement - Continue Reading Below
More From Celebrity
Why Harry and Meghan Should Keep Their Protections
Taylor Swift Explains Why She Loves Joe Alwyn
Advertisement - Continue Reading Below
Real Humans Justin & Jessica Are Going to Therapy
Why the Queen Canceled One of Her Annual Events
Channing Tatum Shuts Down Jessie J Hater on Insta
Celebrities Who Are Mistaken for Other Celebs
Dolly Parton, Icon, Started a Viral Meme
Meghan & Harry's Trademark's Been Blocked for Now
Khloe Kardashian's House Has a Room for Extensions
Katie Holmes Stuns in a White Oversize Coat