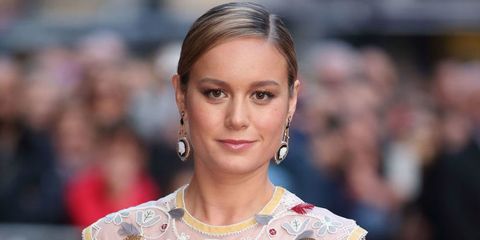 Fans expected Marvel to divulge some details about its first female-helmed movie, Captain Marvel, at this year's San Diego Comic-Con—and the studio did not disappoint. During a packed presentation in SDCC's Hall H, Brie Larson's Captain Marvel costume was revealed, and it definitely looks like something she'll be able to kick ass in.

The studio also teased fans with concept art from the film and revealed some key details about the plot. The story will take place in the '90s (so don't expect cameos from the rest of the Avengers) and the villains will be the Skrulls, a group of alien shape-shifters, Variety reports.

We'll have to wait a while to see Marvel's first leading heroine in action though—Captain Marvel is scheduled for a March 2019 release.