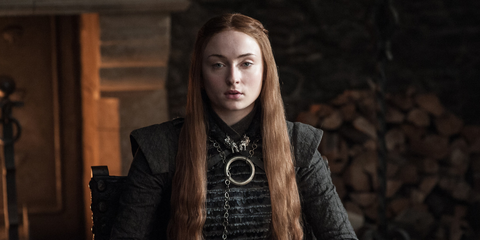 This post contains spoilers for Game of Thrones. You have been warned. Now it is your choice whether you will listen or walk into battle unprepared, like Ned Stark trying to change the way King's Landing runs using nothing but "morals" and "dignity."

No show loves to bring back a vague hint from a season ago like Game of Thrones, except for maybe Pretty Little Liars which is now gone (but not forgotten!). In this week's episode "Stormborn," Arya decided to head back to Winterfell after finding out from Hot Pie that her brother (cousin) is still alive. This always seemed sort of inevitable, but some Westerosi sleuths think they've found evidence that the show's been dropping clues about Arya's journey to the North for a while.

Back in season six, Arya left her training with the Faceless Men after killing the Waif, at which point Jaqen H'ghar said, "Finally a girl is no one." This was what Arya had been waiting to hear from him, but she responded by saying, "A girl is Arya Stark of Winterfell, and I'm going home."

Now comes the alleged hint-dropping: Cut to Jon Snow telling Sansa that he'll protect her from Ramsay Bolton. How does Sansa respond? "No one can protect me. No one can protect anyone." At the time this seemed like a fatalistic but accurate interpretation of the danger presented by Ramsay, but what if it was really a hint that No One, aka Arya, would be coming home to begin her stint as Sansa's Protector?

Sansa's word choice could have been a coincidence, of course, but that seems unlikely given the show's history of Easter eggs and subtle callbacks to the past. At the very least, hope that Sansa and Arya get along better now than they did back in season one. That sisterly bickering has no place in the Great War (unless Jon and his dumb battle plans are the target of the bickering).