It's been 17 long years since How to Lose a Guy in 10 Days made its glorious, fern and Chinese Crested-filled debut.

In case you need a refresher, the 2003 rom-com starred Kate Hudson and Matthew McConaughy as people caught in the middle of a classic screwball comedy style ruse. Kate played a magazine writer tasked with writing the titular how-to piece by actually picking up a guy and driving him away screaming in no more than a week and a half. Matthew, on the other hand, played an ad exec who, desperate to prove he had what it took to market to women, took a bet that he could make any woman fall madly in love with him in the same 10 day period.

Obvious problematic plot-related issues aside, hilarity ensues as Kate does everything she can to be the craziest, neediest, most repellant caricature of a woman she can imagine, all while Matthew refuses to break things off with her, lest he lose said bet (and the big diamond account that the winner is set to head up).

It's a damn good time and, almost two decades later, an enduring modern classic in the rom-com genre to boot. If you're still obsessed with How to Lose a Guy in 10 Days, you're not alone. In fact, the film's stars are still low-key obsessed with it too.

On Friday, Matthew McConaughey took to Instagram to hilariously throw it back to the flick on its 17th anniversary, sharing a picture of his and Kate's characters and their infamous "love fern" from the movie.

"That damn fern," he captioned the shot, tagging his former costar, Kate Hudson, too.

Kate replied almost instantaneously with a tears of joy emoji:

And reshared the photo with her own take on FernGate:

"That damn fern...? That damn fern?!?! YOU LET IT DIE! ❤️" she wrote, in all caps so you can just imagine her character, Andie Anderson, shrieking the words dramatically.

Is there a sequel to be told here? Because, if so, I'm willing to pre-purchase my ticket right now. 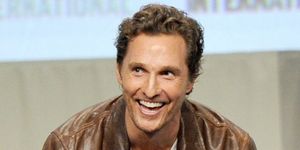 Matthew McConaughey Has a Secret YouTube Channel
The Most Romantic Movies of the Year
Kayleigh Roberts Contributor Kayleigh Roberts is the weekend editor at Marie Claire, covering celebrity and entertainment news, from actual royals like Kate Middleton and Meghan Markle to Hollywood royalty, like Katie Holmes and Chrissy Teigen.
This content is created and maintained by a third party, and imported onto this page to help users provide their email addresses. You may be able to find more information about this and similar content at piano.io
Advertisement - Continue Reading Below
More From Celebrity
Meghan Markle Hangs Out With Melissa McCarthy
Simone's Boyfriend Sent Her the Sweetest Message
Advertisement - Continue Reading Below
What Happens on Katie's Season?
Rebel Wilson Recreated This Britney Spears Look
Jennifer Lopez Flew Back From European Getaway
Jennifer Lopez Wears Old Bracelet From Ben Affleck
Simone Biles Cheers on MyKayla Skinner
See the Royals Socialize at a 1991 Cocktail Party
Eugenie Posts Pics from Harry & Meghan's Home
Queen Trolled Tourists Who Didn't Recognize Her