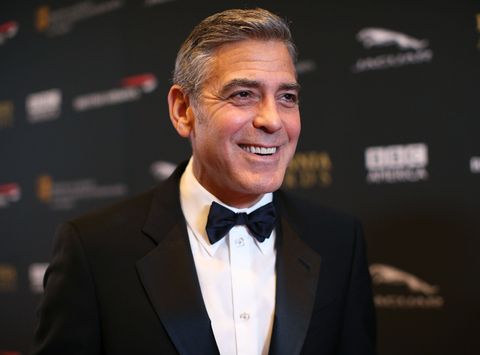 It seems there's a woman George Clooney thinks the world of, and no, we're not talking about Amal. In an interview with Fusion, the actor voiced his support of Hillary Clinton for the 2016 presidential campaign, saying that she was a "tremendous" candidate and offering to aid her however he could.

"I know her and I think the world of her and I think that I would be very happy if she was president," he told Jorge Ramos. When asked about helping her, he responded: "Whatever she wants. In whatever way I can help."

This is good news for Hillary, as advisers have set her fundraising goal at $100 million. In 2012, Clooney threw a fundraising event for President Obama, which raised $10 million for the campaign. Better get party planning, Team Hillary.

George Clooney Gets Sappy Over Amal, We All Swoon

Samantha Leal Senior Web Editor I'm Sam, the senior editor at MarieClaire.com.
This content is created and maintained by a third party, and imported onto this page to help users provide their email addresses. You may be able to find more information about this and similar content at piano.io
Advertisement - Continue Reading Below
More From Celebrity
Ben Affleck Had Dinner With J.Lo and Her Kids
Jessica Biel Talked "Secret COVID Baby" Phineas
Advertisement - Continue Reading Below
Katie Holmes Paired Baggy Jeans With a White Tank
Why Rachel McAdams Turned Down 'Devil Wears Prada'
Did the Queen's Brooch Send a Message?
Jennifer Lopez and Ben Affleck: Everything We Know
What Happens on Katie's Season?
A Look Back at Gwen Stefani & Blake Shelton's Love
Beyoncé Celebrates Twins Rumi and Sir Turning 4
Katie Nails Casual Cool in Jeans, Tee, and Loafers