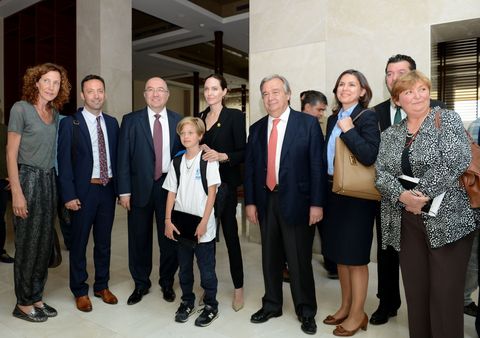 Famous do-gooder Angelina Jolie made a trip to Turkey to honor World Refugee Day, but this time she decided to bring one of her brood with her‚ 9-year-old daughter Shiloh Jolie-Pitt.

Jolie, the UN High Commissioner for Refugees Goodwill Ambassador (takes a breath), and Shiloh spent one day touring a Syrian and Iraqi refugee camp, according to Us Weekly. Jolie also spoke with officials and gave a speech voicing her concerns for the country and world, saying:

"We are here for a simple reason: This region is at the epicenter of a global crisis. Nearly 60 million people are displaced from their homes. That is one in every 122 people on our planet. Our world has never been richer or healthier or more advanced. Yet never before have so many people been dispossessed and stripped of their basic human rights," she said. "We should call this what it is: not just a 'refugee crisis,' but a crisis of global security and governance, that is manifesting itself in the worst refugee crisis ever recorded—and a time of mass displacement."

You can read her full speech on The UN Refugee Agency website. Here's hoping for another generation of Hollywood stars doing good things. (You hear that, Shiloh? We're counting on you.)