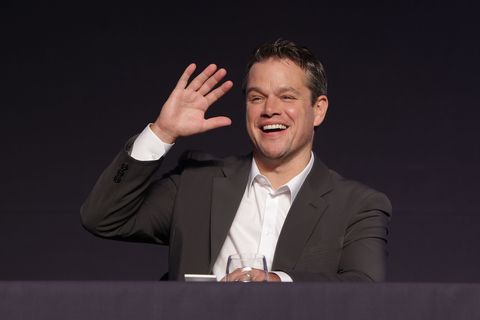 Something very mysterious is going on with Matt Damon's hair. And when we say "hair" we mean his man bun, which staged a zombie-like return from the dead and reclaimed it's rightful spot on Matt's head. In the span of two and a half weeks. What is this sorcery?

Here's Matt Damon's hair on July 28, in all its cropped, salt-and-pepper glory.

And here it is at a Jason Bourne promotional appearance in Beijing on August 16. As you can see, the bun has risen like a phoenix from the ashes.

When Matt Damon's ponytail/bun took over the internet last year, the explanation was simple: he was filming The Great Wall. "It was hair extensions," he told Graham Norton at the time. "There were 700 hair extensions. It was a full day to put them in."

Kay, cool, but this explains literally nothing about why Matt's sporting extensions once again, therefore our current theories include:

1. His extensions have assumed control of his body in a sinister attempt to make man buns popular.

2. Nothing. There are no other plausible theories at this time.