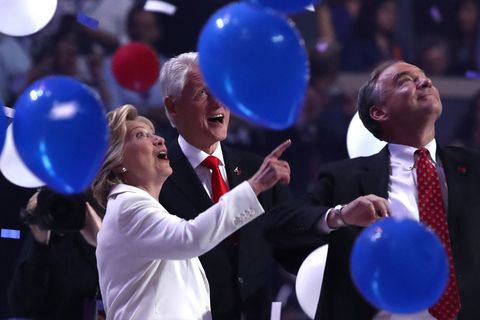 Remember when the Democratic National Convention happened, and the nation learned that Bill Clinton had never seen a balloon before in his life? And his response to being surrounded by so many balloons was abject gee and child-like wonder? Hillary Clinton will never forget.

The presidential hopeful stopped by Jimmy Kimmel Live, and naturally he asked about Bill's balloon obsession. Her response? Laughing hysterically and then saying, "We were all pretty excited about the balloons, but that's one of the things I love about my husband. Is that he enjoys so many things and balloons is one of them."

To be fair, Hillary is also super-duper into balloons:

Let's go win this, together.

Also, in un-balloon related news, those of you who are concerned about Hillary's health will be pleased to know she can open a jar of pickles. That's all. (Meryl Streep voice.)