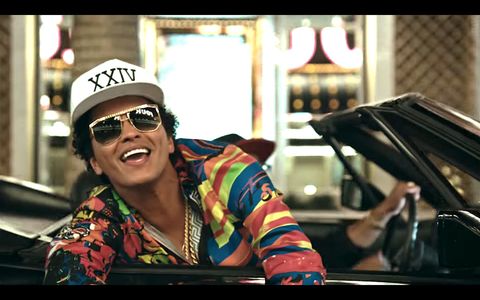 Get ready to dance like no one's watching (kidding, the entire office/subway/your cats are watching), because Bruno Mars just released his first solo track in four years. Oh, and he dropped an accompanying music video while he was at it.

Welcome to "24K Magic," which happens to be the most accurate title ever because this single is a) golden, and b) magical. In the words of the artist himself, "It's showtime! Showtime! Guess who's back again?!"

Ugh, the Michael Jackson vibes are so good and so strong. Strong, like Bruno Mars' enduring love for hats. Anyway, this song is the title track from Mars' next album, which will light up your life on November 18. It's his first album since 2012, so expect it to deliver.