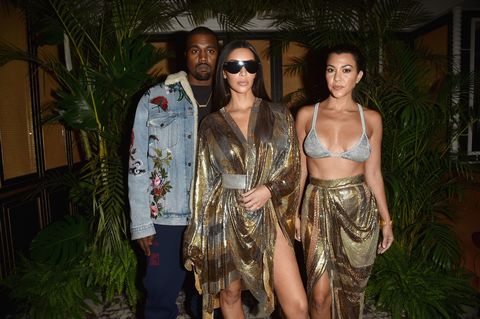 It isn't quite the return we'd hoped for, but it's the one we've got: Kim Kardashian, ever professional, has resumed filming her family's reality show in her first appearance in front of the camera since being robbed at gunpoint earlier this month.

With sister Kourtney, friend Jonathan Cheban, and approximately a dozen armed guards in tow, Kardashian attended husband Kanye West's L.A. show Tuesday evening, according to a source speaking with ET. While Kourtney and Cheban documented the concert on social media, Kim was noticeably absent from their Snapchats.

Kardashian's own accounts, which haven't been updated for weeks, remain untouched.

Chelsea Peng I'm Chelsea Peng, the assistant editor at MarieClaire.com.
This content is created and maintained by a third party, and imported onto this page to help users provide their email addresses. You may be able to find more information about this and similar content at piano.io
Advertisement - Continue Reading Below
More From Celebrity
Bennifer Recreated Their 2002 PDA Moment
Gabrielle Union Debuted a New, Short Haircut
Advertisement - Continue Reading Below
J.Lo Made Out With Ben on IG for Her 52nd Birthday
Harry Is Putting the Queen in a Difficult Position
Are Will & Kate Sending a Message to Harry & Meg?
Harry and Meghan Reportedly Have a Four-Book Deal
Naomi Osaka Lit the Olympic Cauldron in Tokyo
John Legend Performed "Imagine" for the Olympics
Simone Biles Is Honored With Her Own GOAT Emoji
Kate Winslet Reveals Her Favorite Red Carpet Look