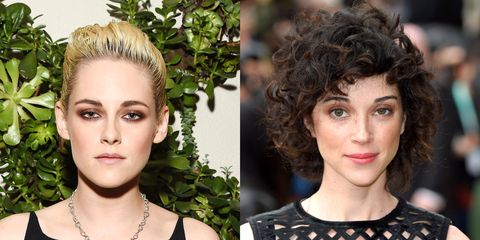 Kristen Stewart and St. Vincent (AKA Annie Clark) have taken their rumored relationship one step further! Which is an incredibly dorky way of saying they worked on a movie together.

Stewart is making her solo directorial debut at Sundance Film Festival in January, where her short film Come Swim is scheduled to air. And if that isn't thrilling enough for you, the movie is scored by Clark, one of the most talented musicians in the game.

Come Swim was both written and directed by Stewart, and stars Josh Kaye and Sydney Lopez (both new to acting). Apparently, it's "a diptych of one man's day; half impressionist and half realist portraits."

Sounds cool, so go ahead and file under "must watch."

Mehera Bonner Contributor Mehera Bonner is a news writer who focuses on celebrities and royals.
This content is created and maintained by a third party, and imported onto this page to help users provide their email addresses. You may be able to find more information about this and similar content at piano.io
Advertisement - Continue Reading Below
More From Celebrity
Kate Middleton's Subtle Environmental Fashion Look
Prince George "Adored" Seeing Dinosaur Fossils
Advertisement - Continue Reading Below
Kate Middleton Borrows The Queen's Fashion Trick
Princes Charle and William "Competing" Over Causes
Lilibet May Be Christened in California After All
The Sweet Family Photos in Prince William's Office
Royal Family Members Can’t Eat Pasta or Potatoes
Prince George Is an Environmentalist, Too
Salma Hayek Looked Super Hot in Leopard Print
Britney Spears Just Trolled Justin Timberlake