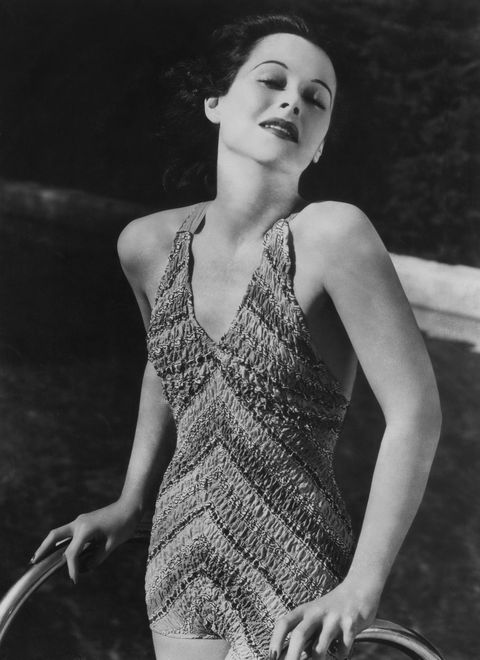 We may live in the era of Fifty Shades, but Hollywood movies haven't always been so liberal when it comes to depicting sex. Still, for as long as there have been moving images, there have been directors pushing the proverbial envelope—and by 1933, the world of cinema had what's generally considered to be the first true movie sex scene. Let's break it down, shall we?

The scene in question is in Ecstasy, a 1933 Czech film (because American filmmakers weren't ready to go there yet) starring legendary actress and inventor Hedy Lamarr.

In one of her first roles ever, Lamarr played a young woman who leaves her older, impotent husband for a lust-filled relationship with a sexy engineer. According to Vulture, their love resulted in what seems to be cinema's first-ever sex scene.

Although Ecstasy's sex scene itself didn't actually feature any nudity, the film did. Most famously, there was a long scene featuring Lamarr skinny-dipping, which was quite scandalous at the time.

Finally, probably the most progressive thing about Ecstasy is that the sex scene depicted Lamarr's character achieving orgasm. Considering even many modern movies struggle with sex-positive portrayals of women, this deserves several 💯 emojis, printed out and sent back in time to 1933.

Kayleigh Roberts Kayleigh Roberts is the weekend editor at Marie Claire, covering celebrity and entertainment news, from actual royals like Kate Middleton and Meghan Markle to Hollywood royalty, like Katie Holmes and Chrissy Teigen.
This content is created and maintained by a third party, and imported onto this page to help users provide their email addresses. You may be able to find more information about this and similar content at piano.io
Advertisement - Continue Reading Below
More From Celebrity
Megan Thee Stallion’s Hottie Bootcamp Is Intense
Katie Holmes' Mango Puffer Coat is a Winter Staple
Advertisement - Continue Reading Below
Kate Rewore Her Favorite Festive Tartan Dress
Kate and Charlotte Hunt for Spiders Together
Princess Diana's Nieces Opened Up About Their Aunt
Elizabeth Hurley, 55, Shows Off Toned Abs On Insta
Keira Knightley Won't Do Nude Scenes Filmed by Men
Kourtney Kardashian Is Dating Travis Barker
Priyanka Chopra Jonas Talks Her New Memoir
Priyanka and Nick on Their Quarantine Quality Time