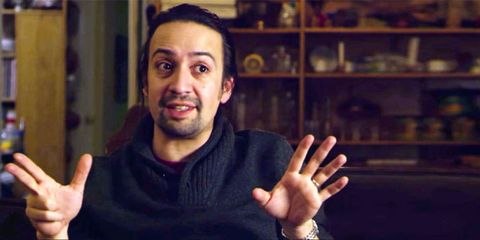 If you've ever wanted to watch Lin-Manuel Miranda drunk and musing about history, you're in luck because Comedy Central's awesomely hilarious Drunk History has done just that. Miranda guest starred on the series to tell the story of (who else?) Alexander Hamilton—but it gets even better.

In an outtake from the episode, Miranda left a drunk freestyle voicemail for musical director Alex Lacamoire. His rap is a littttttle too NSFW to transcribe for you here, but watch the video below (with headphones, if you're in a place where some expletive-filled history-themed musings won't be appreciated) and prepare to laugh all day.

The deleted scene (courtesy of ET)—along with other LOL-worthy extras—will be on the Drunk History: Season 4 DVD, which comes out March 14.