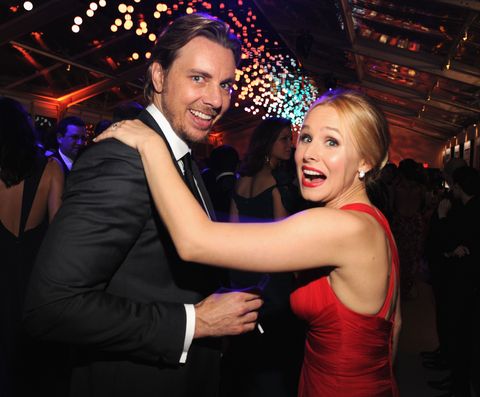 Kristen Bell and Dax Shepard are one of the most relatable couples in Hollywood, and they always seem on top of the parenting game. Which is why the following story Shepard shared with Ellen DeGeneres is so perfectly hilarious.

The CHIPS star stopped by The Ellen DeGeneres Show and recounted the time he *accidentally* taught his three-year-old daughter Lincoln the F-word. Though, in Shepard's defense, he had just almost broken his own nose on Lincoln's bookshelf and "let a couple of motherf*ckers rip."

Naturally, Lincoln screamed "Oh f*ck!" a few days later while struggling to get her sweatshirt off, and also declared "This pool is f*cking warm." Which, amazing.

Bell and Shepard realized they had to talk to Lincoln about the word, but they weren't really that mad. "We were like, 'She's nailing the syntax. She knows that she's using it as an adjective, an adverb," Shepard explained. "We were proud, and she stopped saying it."