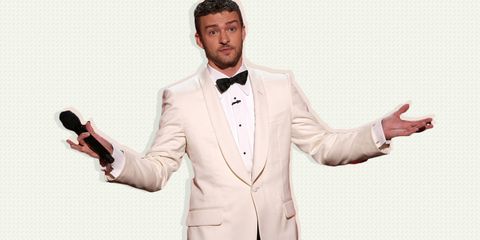 Remember Punk'd? The single greatest show of our generation starring Ashton Kutcher? If the answer is no, it basically consisted of Ashton punking various celebrities. (Note: punking is code for pranking in the language of MTV.)

But the best episode of Punk'd ever starred Justin Timberlake, who was so *devastated* by Ashton's prank that he literally started crying. This way to memory lane...

Ashton decided to convince poor Justin (bless his heart) that he owed $900,000 in back taxes, and as such had his entire house confiscated by Dax Shepherd. (FYI, Dax wasn't famous enough at this point to be recognized by the likes of JT.)

When Justin learned his dogs might be taken away from him, he started crying and called his mom. It was very tragic.

Despite crying a veritable river of tears, Justin seemed pretty amused by the entire experience once Ashton revealed himself. But still, one can only assume he's been traumatized irreparably and has nightmares about this every night. Watch below: