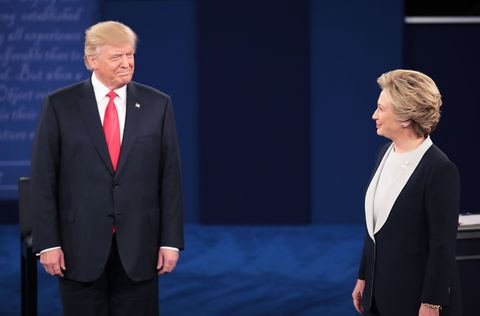 Hillary Clinton might have lost the election to Donald Trump, reality star and fan of chocolate cake, but she sure had a lot of fun during her campaign. In newly released footage from former Clinton Staffer Philippe Reines, HRC is seen prepping for how to handle herself in the event that Trump tries to hug her.

Her reaction says it all 😂.

Not easy to avoid the unwanted Trump hug, sometimes it even takes practice...

Also, in case there's any doubt in your mind that this is, in fact, Hillary, she went ahead and responded to the tweet.

I burst out laughing when I saw this video this morning. Hope it brightens your day. https://t.co/CEcdoaQUuC

Laughing, but also crying. (Also why is there a random TV lying on the floor? So many questions.)