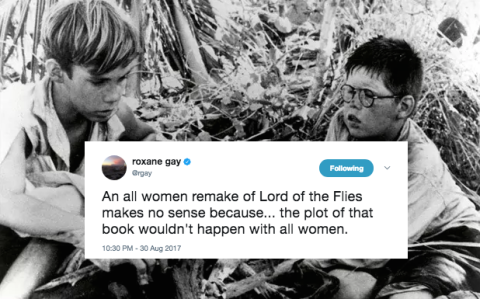 Warner Brothers just announced a remake of Lord of the Flies with an all-female cast, which—naturally—is being made by a fleet of men. In the words of the internet: "why tho." Just take a look at this quote from writer/director Scott McGehee:

"[It's] aggressively suspenseful, and taking the opportunity to tell it in a way it hasn't been told before, with girls rather than boys, is that it shifts things in a way that might help people see the story anew. It breaks away from some of the conventions, the ways we think of boys and aggression."

So, essentially, a team of men want to make a movie about women (sorry, girls) as aggressors? When the original film is about toxic masculinity? Yeah...nah.

This is the only all-female Lord of the Flies reboot I recognize pic.twitter.com/PXkoBJcgxa

We're literally living an all-male "Lord of the Flies" right now, but sure, let's see two male writers describe how women would be worse.

uhm lord of the flies is about the replication of systemic masculine toxicity
every 9th grader knows this
u can read about it on sparknotes https://t.co/EQFyuSA3MV

Dudes writing a female version of LORD OF THE FLIES is like a gift to the problematic think piece gods...

lord of the flies is about the pitfalls of masculinity. don't bring the women into this, we don't care about your ass-mar

-ok guys we need to find something "remake, but with ladies"
-how bout lord of the flies, a story about systemic masculine toxicity?
-genius

The all-female Lord of the Flies movie will just be 2 hours of the girls enjoying not having their jokes mansplained to them.

The Lord of the Flies movie feels like a studio had a big jar of "Make with Chicks?" ideas & just picked the one that made the least sense.

So many think-y face emojis, so little time.