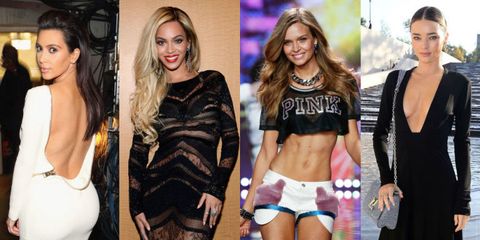 It's unsurprising that some of our favorite A-listers have some tricks up their sleeves for looking their very best. Some of their methods, however, are definitely on the quirky side. From Kim Kardashian's waist-whittling corset to Miranda Kerr's sexy secret to a taut tummy, here, the oddest lengths that celebs go to in the name of a hot bod. (Spoiler: Many of them are actually expert-approved.)

The former Victoria's Secret Angel is hardly secretive about how she stays so fit, not that we're complaining. One of her top tips for beating bloat? A spoonful of unrefined coconut oil, consumed daily. Believe it or not, it's actually a practice many of our go-to nutrition experts swear by to get digestion moving and flush out the system first thing in the morning. (Try stirring a teaspoon into your coffee—it's amazing.)

Getting rid of the bloat is all well and good, but what about the abs underneath? For a killer core, Kerr says that nothing is more effective than consistently getting busy. "The more sex I have, the more defined my arms and stomach get," she told GQ UK last year. "One thing I've noticed is now that I'm having less sex my body isn't as toned."

Like the true Italian siren she is, the iconic actress loves pasta so much, she even famously published a cookbook devoted to her native country's cuisine (1971's In the Kitchen with Love). Here's the catch: According to celebrity diet guinea pig and author of I'll Have What She's Having, Rebecca Harrington, the portion sizes are very, very small—the size of a balled-up fist. Still, it's not a bad practice to scale down refined carbohydrates, and in the end, you get your spaghetti fix.

The 36-year-old model's body is so incredible, she's logged camera time for Victoria's Secret and Sport's Illustrated Swim. And her tip for keeping her diet in check is kind of genius: She keeps her bod on display at all times. "Eating smart is all about having an awareness of your body," she explained to Women's Health in 2012. "The most obvious way to do that is by seeing it. So when you're trying to lose weight, spend more time wearing less. I don't think I could eat a plate of nachos naked—could you?"

The gorgeous actress' top tip is actually a hair and body twofer: "When I'm showering, I'll turn the water to cold for the last couple minutes," she told Into the Gloss. "A hairstylist friend told me [it] closes the hair cuticle...and I always feel like it makes you a little bit skinnier." We can get on board with shinier locks, but the latter? Um...

After giving birth to North, Kim whittled her midsection by wearing a corset—and launched a total waist-training sensation after Instagramming her progress. Celebs from Jessica Alba to Amber Rose have followed suit—as has ELLE.com fashion editor Danielle Prescod, who can personally vouch for its effectiveness.

Though people are still talking about the lemon juice and cayenne crash diet that got her into Dreamgirls shape in 2006, these days Bey's much healthier detox method is eliminating all animal products from her diet. It's part of her trainer Marco Borges' 22 Days Nutrition plan—and the singer loves it so much, that she even teamed up with him to create a meal delivery service for the company. "There's no frankenfood," Borges tells us. "It's founded on the principle that it takes 21 days to make or break a habit. It's a plant-based diet designed to create lifelong habits that will empower you to live a healthier lifestyle, lose weight or to reverse serious health concerns." (Our social media editor, Kate Winick, tried it to great results.)

The editor and all-around fashion powerplayer says she avoids dieting in general (spoken like a true French woman), but does have a couple of preferred beverages for keeping her svelte, couture-ready figure. "I'm very lowkey with my body," she told StyleCaster recently. "I drink green tea all day long, and at night I drink vodka." As for fitness, she prefers ballet.

Leave it to Taylor Swift to keep Brooklyn Decker in shape on top of everything else she does. The model and sometimes-actress told Women's Health that she relies on Tay's music to get her out of a fitness rut. "I returned from a trip to Australia and Munich, so I resorted to my secret, sure-fire method to get my body moving again. I blasted three Taylor Swift songs as loud as I could and started running in place and doing some stupid booty dancing," she revealed. "Maybe I look ridiculous, but dancing gets your energy up a lot better than running on a treadmill or pedaling a stationary bike." So true.

Not that we should really argue with anyone whose nickname is "The Body," but the supermodel's method to looking so phenomenal at 51 is kind of a headscratcher for those not familiar. Relying on the ideology that an acidic body is more susceptible to disease that can throw metabolism and other things out of whack, Macpherson eats alkaline foods (including whole grains, leafy greens) and avoids things like coffee and alcohol in order to keep her inner pH balance in check. She even cops to taking pee tests in order to make sure things are in order. And she's not the only A-lister who does so: Victoria Beckham, Gwyneth Paltrow, and Jennifer Aniston are also fans—and considering that's pretty much the Good Body Brigade, we'd say they're onto something.

We'd be remiss not to include Madame Goop, who pretty much writes the book (or rather, blog) on whacky detox methods. After a period of indulgence (which could just mean that she had a solitary cigarette and glass of wine), Gwyneth likes to rely on an elimination diet to get her body back to square one. This entails cutting out a laundry list of foods that can potentially aggravate bodily allergies and disturb digestion, ranging from gluten to dairy to orange juice.

While some studies show that a couple cups of coffee daily are a great way to get metabolism whirring, Berry allegedly relies on grounds for their external, body-toning benefits. And she's not off the mark: The caffeine content in coffee has been shown to firm up skin and even reduce the appearance of cellulite.

The supermodel joins a legion of A-listers who sing the praises of this natural detox method. One spoonful of ACV taken daily is shown to have a number of benefits from boosting weight loss and lessening blood pressure to fighting toxins.

Parenting requires you to multitask, especially when you're an actress who needs to get back into fighting shape post-pregnancy. To do so, Dewan-Tatum actually used her child as additional resistance to amp up her fitness—even when she wasn't technically working out. "When I'm rocking Everly to sleep, I do lunges across the nursery, squats, or calf raises," she told Us Weekly. "Suddenly 45 minutes have gone by, she's asleep, and I got a little workout!"

Heading backstage at the annual Victoria's Secret fashion show can be an intimidating experience—but it also leaves a lot of opportunity to pick up on some really stellar beauty tips. Case in point: Ab-tastic Josephine Skriver revealed to Fashionista that her favorite de-bloating method is simply to drink a mugful of hot water first thing in the morning and then again before bed. "It really helps clean me out, and it's cleared up my skin a lot," she said. "Think about cleaning your drain at home—if you do it with normal water, nothing really happens, but with hot water, it clears out the whole thing." 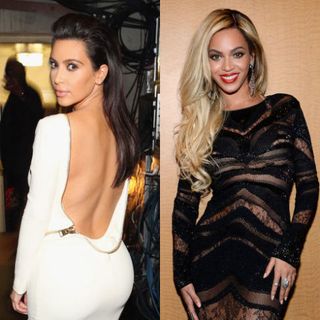