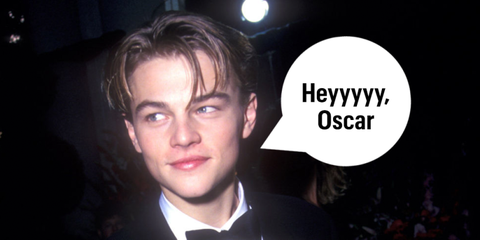 The five-time nominee knows his way around the block. Here, we imagine his innermost Academy Awards red carpet thoughts.

*Spots Kate Winslet across the room*

Just wondering where the snacks are...

Who's my date, you ask? Just some model.

Stand closer to me, Gisele!

Sh*t. I think I left my vape in the car.

Yep. I definitely left my vape in the car.

I'm seriously boycotting if I don't win. Where's my vape?

All I need in this life of sin, is my and my...Kate Winslet.

Pretty happy I met this guy, you know?

Peace out, industrial polluters. I got what I came for. 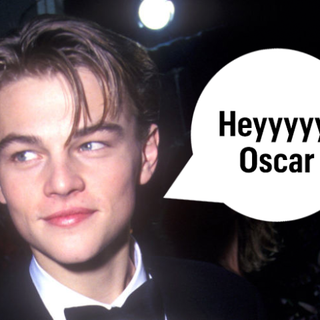 Advertisement - Continue Reading Below
Rosa Heyman Deputy Editor As Cosmopolitan’s deputy editor, Rosa Heyman oversees a team of whip-smart editors and hilarious writers who bring you some of the best investigations on the internet, from dissecting the latest Kardashian drama to uncovering the link between white supremacy and misogyny.
This content is created and maintained by a third party, and imported onto this page to help users provide their email addresses. You may be able to find more information about this and similar content at piano.io
More From The Oscars 2021
See Adele's Perfect Oscars After-Party Look
Emrata Wore the Most Emrata Outfit to Oscar Party
Advertisement - Continue Reading Below
J.Lo Outshone Everyone at the After Parties
Please Look at These Brad and Regina Photos
Chrissy Wore a Mint Dress With a High Slit
Jennifer Aniston Saved Her Best LBD for Last
Did You Spot Charlize Theron's Hidden Hair Detail?
Billie Eilish's Reactions Made the Oscars
Timmy Photobombed Margot on the Oscars Red Carpet
Elizabeth Banks Rewore Her 2004 Oscars Dress