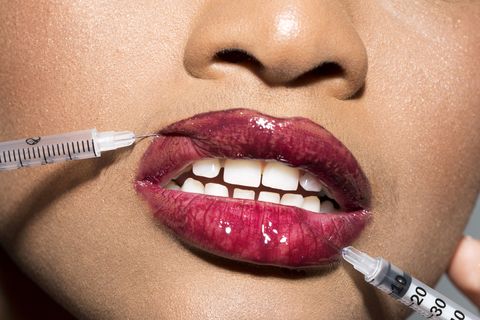 When people go under the knife, they're focusing more and more on fat, fillers, and facelifts to achieve the perfect selfie. According to data released by the American Society of Plastic Surgeons, there have been upticks in facelifts, fat transplants, and injectables—and Instagram filters might be the reason.

There were almost 1.8 million cosmetic surgeries performed in 2016. Here were the top five most popular:

And there were a whopping 15.5 million minimally-invasive cosmetic procedures performed last year. Here were the most popular varieties:

The study found several fascinating trends in 2016's data. First of all, the facelift had previously fallen from the top five (bested by the tummy tuck), but came back in 2016, and surgeons blame Instagram. "Patients are captivated by instant improvements to the face," Dr. Debra Johnson, president of the American Society of Plastic Surgeons, said in a statement. "It's evident in the popularity of apps and filters that change how we can shape and shade our faces."

Second, patients are getting more procedures that harvest their own fat to deposit elsewhere in the body. There were increases in cosmetic fat injections that target specific areas, that "freeze" fat without surgery and that tighten sagging areas. There were also increases in buttock and breast augmentations that use fat grafting.

And third, and perhaps most striking, is that the ASPS' data covered labiaplasty for the first time ever. They found that the surgery, which lifts or injects fat and fillers into the labia, was performed 12,000 times in 2016, which is a 39 percent uptick from 2015.

According to CNN, surgeons are reporting anecdotally that the specific requests from patients have been changing. One doctor said his patients are requesting smaller sizes when they get breast augmentation. Another said his patients want fewer procedures that remove extra skin and are opting for fillers instead. Fillers are also popular because of the Kylie Jenner effect; the reality star has admitted she uses them to plump her famous lips.

"A decade ago plastic surgeons might have seen a patient every seven to ten years when they needed a major procedure like a facelift or tummy tuck," Dr. Johnson said in the ASPS statement. "Now patients have ongoing relationships with their plastic surgeons and feel more comfortable discussing all areas of their body that they may be interested in rejuvenating."