Whether it’s by a river like on Outlander, in a cave like on Game of Thrones, or in a bed like, well, almost everywhere else, one thing is for certain: Peak TV has also bought on the peak of TV sex scenes. But for all of the efforts to display an array of aspirational boot-knocking, few television series seem able to show what makes the majority of women actually get there.

Sex on TV is traditionally heterosexual, with a huge reliance on penetration, and almost no attention to clitoral stimulation—which means that sex scenes on TV have frequently gotten more explicit, but rarely more realistic.

This, perhaps unsurprisingly, can be just as unsatisfying to create as it is to watch. The dissatisfaction is a favorite topic of Rachel Bloom’s, star and co-creator of the CW’s Crazy Ex-Girlfriend. Bloom is a Twitter crusader, sounding off about the dearth of realistic sex scenes in media and the need for comprehensive sex ed. (It’s why she wrote the forward to her friend Emma Koenig’s anthology book, Moan: Anonymous Essays on Female Orgasm.)

And she’s just as willing to talk about it in person. A recent chat at her kitchen table included the two following pieces of information (among other things): 1) She started masturbating at 11 after reading about her clitoris in a puberty book, and 2) she still remembers a conversation she had at 22, during which a boneheaded coworker told her that men feel emasculated if their penises aren’t enough in the bedroom. (If it’s not apparent already, Bloom is a very open person. On multiple occasions during our interview she had to take breaks to run to the bathroom...and shouted answers to me from the other side of the door. She blamed it on the Thai food she had for lunch.)

Out of respect for the diversity of women’s bodies and the fact that a small percentage of women can actually orgasm vaginally, they didn’t want to eliminate penetration portrayals altogether; they just wanted to show options beyond it—and to continue to fighting the good fight of expanding broadcast TV’s sexual worldview. Through some sorcery with the network’s Standards and Practices department, Crazy Ex even managed to make the act of failing to please one’s partner into a song: “The Buzzing From The Bathroom,” a Les Miserables–parodying musical number from the show’s third season (sung by Michael McMillian as Tim), is about a man’s realization that his wife has been clandestinely using her vibrator after their mundane intercourse.

Even that relatively timid scene had to follow strict stipulations from S&P in order to air on a network. To wit: The song comes about, in part, when another character reads about the clitoris (it had to be “clitoris,” not “clit”) from a medical journal instead of bringing it up in casual conversation (the writers have never been allowed to use the word on the show again). Crazy Ex has also never been permitted to show thrusting, side-boob, or a guy touching himself, nor can they imply that a naked woman’s legs are wrapped around her naked partner. Any of the show’s songs referencing orgasms rely on double entendres and other word play. “You can only show really the before and after. For even someone to reach down and touch themselves is seen as a filthy act,” she says.

So why can’t broadcasters show real sex? While every network’s S&P department has its own rule book—remember “vajayjay,” Shonda Rhimes’ famous “vagina” workaround on Grey’s Anatomy?—one reason for the widespread prudishness is good, old-fashioned bureaucracy. In 1964, the Supreme Court determined that there’s no enumerated ruling on what classifies as obscenity and pornographic materials, leading Justice Potter Stewart to famously write of porn, “I know it when I see it.” The Federal Communications Commission was formed a year later and now has considerable clout in determining what is obscene, indecent, or profane on any TV show that happens to be free to the public during prime viewing hours. Cable TV and streaming get away with more because we pay to access them and, it’s implied, we know what we’re buying.

Crazy Ex was originally a Showtime pilot, and Bloom assures the scripts she wrote for that iteration were much dirtier. But the tepid CW version has actually produced it's own unique benefits. “Parents will say to me, ‘I've watched the show with my daughter, and we talked about it.’ That means a lot to me,” she says.

Bloom says of Twitter: “I pick very specific times. I also pick subjects that I can speak authoritatively on. If I’m going to get criticism, I need to make sure that I know what I’m talking about.”
Robyn Von Swank

Another reason for the lack of realistic TV sex is—you guessed it!—sexism. While most Americans have grown accustomed to seeing LGBTQ characters or premarital sex on their run-of-the-mill network TV, our culture at large is still conditioned to ignore female pleasure. “A male orgasm is procreation and a women's orgasm is purely for sexual pleasure,” Blooms says as an explanation for why penetration is accepted, not only as the norm, but the holy grail. She goes on to reference a quote by a high-end French woman who owned a BDSM dungeon, which she believes she read in the New York Times: “‘Americans are not averse to sex, they're averse to pleasure.’ I found that very interesting.”

Meanwhile, shows that do succeed in portraying female pleasure are deemed “racy” or “edgy”—not exactly an empowering message for viewers to take away from true-to-life sex scenes. “If we don’t talk about the nuances that come with females consenting, we don’t truly understand what it means for women to assert their needs for pleasure,” says Rebecca Ortiz, an assistant professor of advertising at Syracuse University, who has studied the media’s implications on women and teens. “And then young women aren’t taught that that’s important.”

And that’s a shame, because realistic sex scenes have the power to undo stigmas and misconceptions held by consenting adults. “I’ve always been into realism and the mechanics of sex,” says Stephen Falk, the creator of FXX’s dark relationship dramedy You’re the Worst.

This season, for example, viewers of You're the Worst saw a woman spit in her hand to wet herself before mounting a man. Falk also wrote the episode of Showtime’s Weeds that opened with a drawing of a vulva, and an episode of Netflix’s Orange Is the New Black that discussed scissoring. He says that realistic, empowering depictions of female sexuality should get better representation. “I think it’s important for portrayals of women taking pleasure in their own bodies [to show] that that the clitoris is pretty important,” he says.

FXX’s You’re the Worst is used to pushing boundaries.
FXX

In a post-#MeToo world the creation of a sex scene—realistic or not—is complicated. Sensitivities on all sets are particularly high, but the movement has brought to the surface the problematic nature of once-accepted on-set practices while filming hookups. (Frankie Shaw, the creator of Showtime’s SMILF, for one, was investigated for misconduct over the way sex scenes were handled on her show.)

Both Falk and Saracho stress that while no one wants to have to talk nitty-gritty sex stuff with their employees, they have to be grown-ups and have frank conversations with their casts about the detailing in these scenes. Saracho explains that on Vida, sex scenes are choreographed two days before filming, and each actor is given a contract stipulating what exactly will happen when they shoot.

’Vida’ is inclusive about its handling of sex, on-screen and off.
Erica Parise/STARZStarz

“I think that seeing how normal people fuck, how regular people fuck, what fucking is actually like, I think is really important,” says Bloom “How do you bridge that gap? Porn definitely does not help with that aspect.” But for 3-and-a-half years, Crazy Ex-Girlfriend has. Now, the sex-positive show will air its final episode on April 5. Bloom is exhausted, the schedule was brutal, and she doesn’t yet know what her next project will be. But she promises me this: “The next thing I do, if I'm writing and acting, I have to be able to do a sex scene where I touch my clit.” 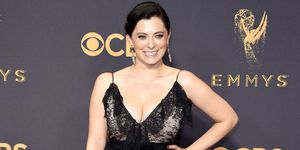 Why Rachel Bloom Paid for Her Own Emmys Dress
This content is created and maintained by a third party, and imported onto this page to help users provide their email addresses. You may be able to find more information about this and similar content at piano.io
Advertisement - Continue Reading Below
More From Culture
Suni Lee Just Scooped Up Gold in Tokyo
Movies Everybody Should Watch At Least Once
Advertisement - Continue Reading Below
'Virgin River' Season 4: Everything We Know
'Love Is Blind' Season 2 Is Coming!
Simone Biles' Sister Is Her Fiercest Champion
Simone Biles Quotes to Live By
Could 'Manifest' Come Back for a Fourth Season?
'Bachelor In Paradise' 2021: Everything We Know
Read an Excerpt From 'We Were Never Here'
How to Join Marie Claire's Virtual Book Club