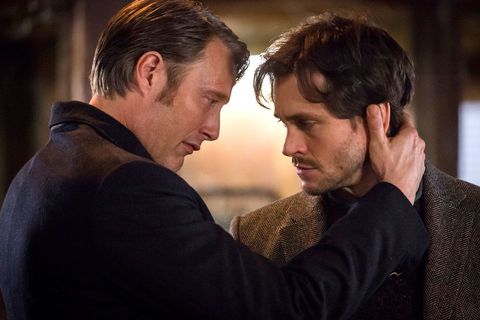 It's that time of year—the equally terrifying and victorious few weeks when The TV Network Gods bestow upon us their rulings for which of our beloved shows are moving to the next round. Here, a list of what's happening to our favorites.

Ugh, fans of brooding Hugh Dancy and even-more-brooding Mads Mikkelsen will have to look elsewhere for their weekly broodfest (Taylor Kitsch on True Detective, perhaps?) now that fan-favorite-but-not-critical-darling Hannibal has been cancelled by NBC. But, because these people like to toy with us, they're of course leaving things open-ended:

Second, we are exploring other options for future seasons. #Hannibal

DEGRASSI IS COMING TO NETFLIX! After, the devastating news broke that our most beloved high school TV show was leaving TeenNick (you know you still watch it), Netflix came in like the no-date Friday night rescue it is to save the day! Degrassi: Next Class will come to Netflix beginning in 2016. This means we can still hold out hope for a Drake reappearance.

What was once super sad news (that The Mindy Project had seen its final days on Fox) has now become awesome news—Hulu and NBC Universal made a deal to continue The Mindy Project for at least 26 more episodes. Clearly they're trying to avoid that angry mob. 🙏

Empire is among the list of this season's most successful breakout shows. In lieu of its instant popularity, FOX announced the second season will increase from 12 to 18 episodes and be split into two halves. Hooray for more drama and a lot more Cookie!

Thank the TV heavens! CBS announced that CSI is actually returning. They almost had us!

We never thought we'd see the day when American Idol was no more. After 15 seasons, Fox has decided the reality music show will end. So long Ryan Seacrest. *cries*

Yes, your eyes have not deceived you. John Stamos confirmed that the Full House fam is returning to TV with a reunion episode followed by a Netflix spin-off series featuring DJ Tanner and her children.

This was probably your favorite years ago, but what was once strictly for tots is returning for a more adult audience thanks to ABC. The revival will explore the relationships and lives of the muppet characters. Adult puppets: kinda weird, kinda cool.

Okay seriously, how long has this show been running? Some of us are still recovering from the death of McDreamy while many others shelved GA about five years ago. If you are of the former group, never fear: Grey has plenty of melodramatic intensity and tear-jerking episodes to offer for what is likely to be several more seasons.

The renewal of Scandal is less of a surprise considering it's easily the most talked-about show ever. Let's face it: If Scandal *is* ever cancelled, pigs will fly and the fat lady will probably be screaming. Plus, there is still so much left unanswered!

Fresh off the Boat = Renewed

The immigrant-centric sitcom will continue delivering dark humor and intelligent parodies of the stereotypes we normally tiptoe around.

We are so, so sorry, Revenge fans: The show you fiercely defend is heading for its last season finale. All great things must come to an end, but we can take solace in the producer's promise to deliver greatness during this Sunday's concluding episode.

After four seasons, Hart of Dixie joins the list of axed shows for the year. Despite its outstanding performance on Hulu, the show's ever-changing schedule and season four's shrunken episode-run more than hinted that Dixie was on its way out.

Thankfully the CW isn't cutting us off from all the good stuff. Supernatural and all its high-fantasy greatness will return for our viewing pleasure.

And another one bites the dust. After only one season, IFC has cancelled the comedy series that follows real-life actor/musicians Riki Lindhome and Kate Micucci. At least the band is still together.

'The Mindy Project' Is Canceled and, Naturally, Everyone Is Really Upset About It

Simedar Jackson I'm Simedar, an intern here at MarieClaire.com!
This content is created and maintained by a third party, and imported onto this page to help users provide their email addresses. You may be able to find more information about this and similar content at piano.io
Advertisement - Continue Reading Below
More From Culture
What Songs Are on the 'Virgin River' Soundtrack?
The Very Best Rom-Coms of All Time, Ranked
Advertisement - Continue Reading Below
Netflix's 'Selena' Cast vs. Real Life
It's Been a Weird Year for 'The Bachelorette'
The Best New Christmas Movies of 2020
Meet the Cast of Netflix's 'Virgin River'
Watch the Trailer for the New 'Euphoria' Special
Zac Clark Could Be a 'Bach' Frontrunner
This Guy Is a Frontrunner on 'The Bachelorette'
Will There Be a Season 3 of 'Virgin River'?