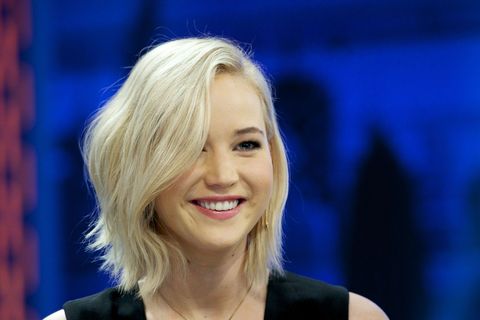 The Golden Globe nominations are in, and it's time to talk feminist #SquadGoals. This year's group of women nominees spent the latter part of 2015 rallying against Hollywood's institutional sexism, and their recognition at the Globes offers a glimpse of the change that's hopefully just around the corner.

Jennifer Lawrence (nominated for Joy) wrote her essay about the Hollywood wage gap just three months ago, saying, "When the Sony hack happened and I found out how much less I was being paid than the lucky people with dicks, I didn't get mad at Sony. I got mad at myself. I failed as a negotiator because I gave up early."

The essay created an almost immediate domino effect: Bradley Cooper said he'd help his female costars negotiate equal salaries, and The Hollywood Reporter was inspired to stop ranking women. Flash-forward a few months to the Golden Globes, and Lawrence is flanked by a new wave of Hollywood actresses who also happen to be activists. They want more than to play strong women in leading roles. They want equal pay for those roles.

Amy Schumer, Alicia Vikander, Brie Larson, Saoirse Ronan, and Rooney Mara were all nominated for Best Performance by an Actress, and they've all echoed Jennifer's convictions about the wage gap. "I've been in films where I've found out my male co-star got paid double what I got paid," Mara told the Guardian. "To me, it's frustrating."

For her part, Ronan said: "I hope with the likes of Jennifer Lawrence speaking out it forces things to change." And Alicia Vikander echoed, "I think there is a change happening, I've seen it."

Annoyingly, real change takes time. But having an army of activist actresses leading the film nominations at the Golden Globes isn't just #SquadGoals—it's the start of the very overhaul these women have been fighting for.