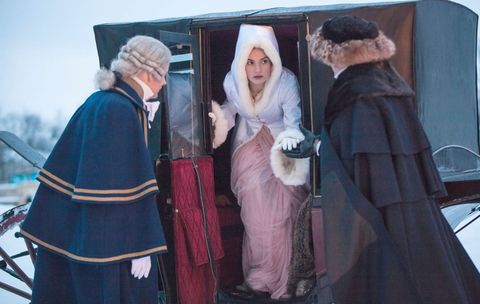 The second installment of Lifetime's War & Peace airs tonight, and we're bringing you an exclusive look at what the future might hold for Lily James's character (aside from a world of giant furry hats, that is).

In the below clip, the romance-obsessed Countess Natasha Rostova (played by James), takes a casual carriage ride in the woods and questions her budding relationship with Andrei Nikolayevich Bolkonsky. "Of course I love Andrei," Natasha dreamily says in the scene. "Of course I do, and I miss him, and I long for him, but at the same time..."

Looks like Natasha's mind is far from made up, and by the way:  Those of you who haven't watched War & Peace yet should know that 1) There's still time to catch up, and 2) It's basically Downton Abbey meets a Lifetime soap. Which means pure gold.