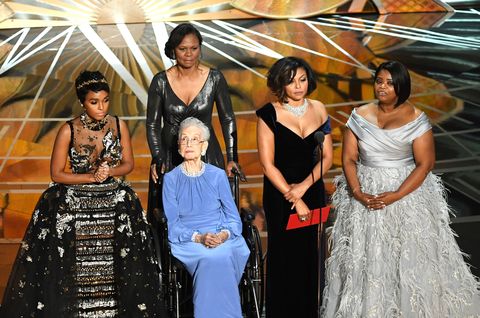 Oscar nominated film Hidden Figures tells the true story of black NASA employees Katherine G. Johnson, Dorothy Vaughan, and Mary Jackson—who made John Glenn's orbit into space possible. Their story was largely unknown before the film (hence the title), which has finally catapulted them to the fame they deserve. Sadly Vaughan and Jackson are no longer alive, but Johnson made an appearance at the Oscars alongside actresses Octavia Spencer, Janelle Monáe, and Taraji P. Henson—who plays her in the film.

Johnson didn't say more than a brief thank you, but the moment was incredibly moving nonetheless. Watch it below, and prepare for tears...

Cheers to this amazing woman finally getting the recognition she deserves. 🙌