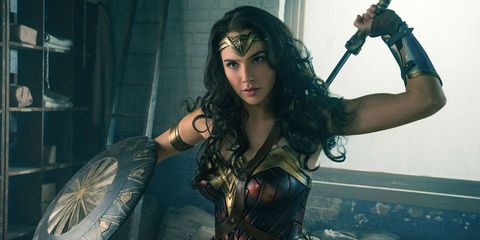 Last night, James Cameron blessed us with his unsolicited opinion about Wonder Woman, which he considers to be "a step backwards," because "she's an objectified icon, and it's just male Hollywood doing the same old thing!"

Setting aside the irony of Patty Jenkins—that rare example of a female director working in the blockbuster space—being called part of "male Hollywood" by a man who defines it, Cameron's mansplaining comments are also entirely self-serving, since he segued right into patting himself on the back for his own strong female character, Sarah Connor. Because there is only room for one type of female strength, and that is the type that James Cameron approves of.

Jenkins herself already delivered a pretty perfect response to Cameron, pointing out: "James Cameron's inability to understand what Wonder Woman is, or stands for, to women all over the world is unsurprising."

Here are the eleven best Twitter reactions to Cameron's nonsense:

The James Cameron who made fun of his Titanic star by calling her "Kate Weighs-a-Lot"? That James Cameron? https://t.co/puCLt3jIHu

"Wonder Woman is a step backwards."

How was it a step backwards, James Cameron? #WonderWoman pic.twitter.com/PT1NYCsLXB

Is this the same James Cameron who routinely polled his all-male crew to ensure a lady alien was fuckable, or is that a different dickhead? https://t.co/9AXfkVacD0

I think of James Cameron exclusively as "that dude who didn't manage to hold Kathryn Bigelow down."

James Cameron may have just proved the existence of a multiverse because there's no way in hell we're navigating the same reality.

Phew! I was feeling empowered, but thank goodness James Cameron stepped in and mansplained how I should feel watching Wonder Woman for me. https://t.co/4SgDWFO124

James Cameron is absolutely one of those dudes who's way to eager to tell everyone how attractive he finds Brienne.

Emma Dibdin Contributor Emma Dibdin writes about television, movies, and podcasts, with coverage including opinion essays, news posts, episodic reviews and in-depth interviews with creatives.
Advertisement - Continue Reading Below
More From Culture
Treat Yourself to a Chick Flick Tonight
Who Will Be on 'Bachelor in Paradise' in 2020?
Advertisement - Continue Reading Below
An Investigation Into the Next 'Bachelorette'
'The Bachelor' Has Already Finished His Season
Can We Talk About Kelly's Mom From Love Is Blind?
The Best Reactions to the 'Love Is Blind' Finale
Hilary Duff Hints About 'Lizzie McGuire' Reboot
Ryan Murphy's Producing a Love Letter to Hollywood
This Is When the 'Love Is Blind' Finale Will Drop
Will Gigi and Damian Actually Get Married?