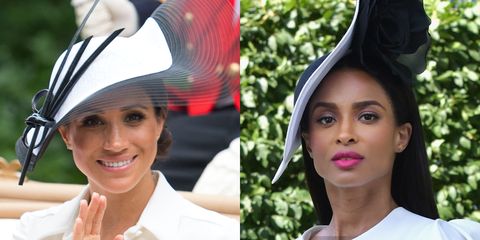 On Tuesday, Meghan Markle and Prince Harry joined the Queen for the opening day at the Royal Ascot. For the big event, Meghan wore a white Givenchy shirt dress that was belted at the waist, a black-and-white Philip Treacy hat, black pumps, and a simple black clutch.

The look was simple! Pretty! And, apparently, The Look for Royal Ascot because yesterday Ciara arrived at day three of the races wearing a nearly identical outfit:

The singer also chose a white dress belted at the waist for the occasion, though hers was more structured than Meghan's and designed by Edeline Lee. Like the Duchess of Sussex, Ciara finished her look with black pumps, a simple black clutch, and a black-and-white Philip Treacy hat. Ciara's asymmetrical sleeves even look a bit like the cut of Meghan's skirt!

There are, of course, several differences: the Givenchy dress features delicate lace detailing, buttons down the front, and is cinched with a black belt. The Edeline Lee dress sticks to all white and one fabric, but gets fancy with the shoulders and sleeves. Ciara also chose a pop of color for her lips while Meghan wore the clean, minimal makeup look she's been sporting lately. (Who could forget her royal wedding makeup?!) Their hats, though by the same designer, aren't quite the same. Ciara is also wearing her name tag while Meghan chose to carry hers instead.

Considering the Royal Ascot's strict dress code is all about "sartorial elegance," it makes sense that the women dressed in a similar fashion. It requires ladies to wear skirts that fall below the knee, dresses that have at least one-inch straps, and hats that have "a solid base of 4 inches or more."

Both women look marvelous and ready for a day at the races!

Related Stories
Shop Every One of Meghan Markle's Best Looks
Meghan Markle Will Join the Queen Again Soon
This content is created and maintained by a third party, and imported onto this page to help users provide their email addresses. You may be able to find more information about this and similar content at piano.io
Advertisement - Continue Reading Below
More From The Ultimate Guide to the Royal Family
Rare Photos From Diana and Charles' Wedding
Prince George Looks So Grown-Up in New Portrait
Advertisement - Continue Reading Below
Whatever Happened to Archewell Audio?
Prince Harry Is Set to Publish a Memoir
For Prince George Turning 8 Is a Fashion Milestone
Queen & Philip Made a Pact Not to Mourn Too Long
Diana Was Traumatized by Something Charles Said
Charlotte Will Miss George at Boarding School
Harry & Meghan Want Queen at Lili's Christening
The Queen Wore a Brooch With a Diana Connection