Kylie Jenner's following in her big sister Kendall's footsteps by officially joining the Adidas family. The 21-year-old announced last week that Jenner has become an Adidas ambassador, while modeling the German brand's chunky new "Falcon" sneakers on Instagram. While Jenner's exact style is currently sold out—a black and light pink combo—the kicks are expected to restock on Sept. 6. According to the brand's website, the "Falcon" is based off '90s running designs and the "carefree, rebellious spirit of that decade's art, music and fashion."

Since dad sneakers are heavily trending, it's a given that Adidas has also tapped into this market and chosen Kylie as its main face to rep the new shoes. The youngest of the Jenner-Kardashian clan, she has 114 million Instagram followers and is reportedly on track to becoming the youngest-self-made billionaire. (Not to mention, Jenner reportedly also gets paid 1 million dollar per Instagram post...and I count five Adidas sneaker images, so far.)

Jenner clearly loves her Adidas, however, as she's been rocking various styles on social media. Her favorite way to wear sneakers is either with a body-con dress/jumpsuit or with sweatpants. Though she's only repping the "Falcon" sneakers for now, it's only a matter of time before she designs a shoe for the brand.

chillin in my @fashionnova

ready for the weekend 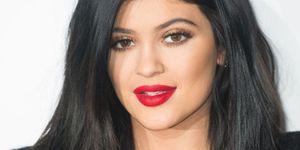