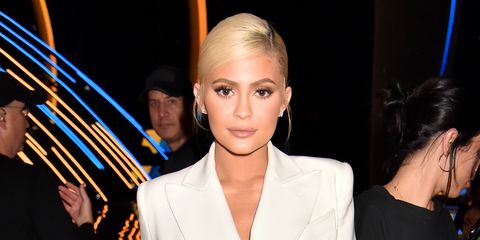 It's hard to believe that Stormi Webster is already seven months old, but time flies, right? On Saturday, Kylie Jenner's pride and joy celebrated seven months on this earth (Kylie gave birth to Stormi on February 1, after keeping the pregnancy technically secret for months) and Kylie celebrated the occasion with some mother-daughter time by the pool.

Kylie wore a neon yellow bikini for the luxurious day in the sun (because, remember, she's a cool mom). Stormi wore a white one-piece for the day and a nice big, floppy woven hat, to shield her delicate baby skin from the sun.

In the photo, Kylie and Stormi sit together on a towel-covered lounge chair, with Stormi in her mom's lap and Kylie holding her daughter lovingly. The photo is definitely not a selfie, but there's no clue who took it (it could have been an assistant, but we prefer to imagine it was Stormi's doting dad, Travis Scott).

Kylie kept it simple and nonverbal with her caption, which was a short, double emoji expression of her love for the sunny day: "💛☀️."

Luxe and spa-like as Stormi's birthday celebration may be, it is much more low-key than the bashes Kylie threw for herself for her 21st birthday last month. Kylie kicked off her birthday festivities with a Barbie-themed club party with all of her famous sisters. The night resulted in this photographic gift to the world:

She later moved the celebration to Vegas, where she partied with friends and made the most of turning 21.

Kayleigh Roberts Contributor Kayleigh Roberts is the weekend editor at Marie Claire, covering celebrity and entertainment news, from actual royals like Kate Middleton and Meghan Markle to Hollywood royalty, like Katie Holmes and Chrissy Teigen.
Advertisement - Continue Reading Below
More From Celebrity
36 Celebrity Couples Who Love Some PDA
Ben Affleck Is Blond Now
Advertisement - Continue Reading Below
A Timeline of Charles and Diana's Relationship
Kendall Jenner Wants to Work for Beyoncé
Harry & Jon Bon Jovi Sing Together at Royal Event
Khloé Kardashian Is Being Trolled Over Febreze
A 'Friends' Reunion Special Is Coming to HBO Max
Katie Holmes Is in Head-to-Toe Chloé at Their Show
Ariel Winter Now Has Strawberry Blonde Hair
46 Stars Who Dated Before They Were Famous