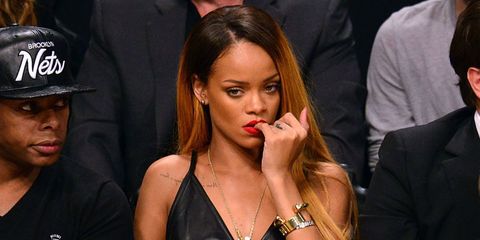 Attention, all nail biters, hair twisters, and skin pickers: Your compulsive body-focused habit may actually be a sign that you're a perfectionist, according to researchers at the University of Montreal. Their new study published in the March issue of the Journal of Behavior Therapy and Experimental Psychiatry explains that those behaviors can be a result of a side effect of the trait: being more easily bored.

"We believe that individuals with these repetitive behaviors may be perfectionistic, meaning that they are unable to relax and to perform task at a 'normal' pace,"said lead author Kieron O'Connor, Ph.D., in a press release for the study. "They are therefore prone to frustration, impatience, and dissatisfaction when they do not reach their goals. They also experience greater levels of boredom." So, acts like picking your nails "satisfy an urge and deliver some form of reward."

The researchers studied 48 participants, half of whom had those habits. The subjects were screened with a questionnaire on their emotions (which included scales on anger, guilt, and irritability) and an interview by a clinical evaluator. They were then put in four scenarios where boredom, frustration, stress, or relaxation were provoked to see their reaction. Those with body-focused habits felt more provoked to do them when feeling stressed or bored—not relaxed. "This means that condition is not simply due to 'nervous' habits," researcher Sarah Roberts said. And there you have it: Your quirk became a little better, thanks to science.

How to Stop Biting Your Nails

20 Life-Changing Hacks for Doing Your Nails