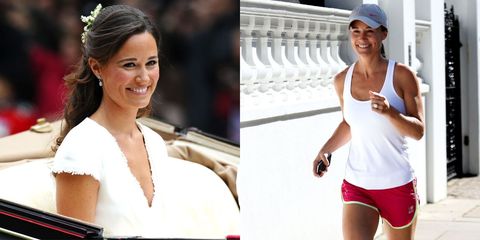 When Kate Middleton married Prince William in April 2011, her little sister and maid of honor Pippa Middleton, then 27, nearly stole the show in a white dress that hugged her butt in all the right ways:

Now that Pippa is 33 and marrying James Matthews on Saturday, she's been spotted sweating her butt off ahead of the big day. Here's how she's reportedly been prepping:

The endurance athlete has done crazier things than stepping into the public eye days before her wedding for a run with her fiancé, as E! News reports — like the time she completed a 50-mile running and swimming biathlon in a 13-plus-hour race in 2015. Last year, around this time, she went to China to run the Great Wall Marathon (her second marathon), finishing 13th in the women's division. Although it's unclear just how much Pippa has been running ahead of her wedding day, an unnamed source told E! News that Pippa has been focusing on cardio. (If she runs down the aisle, there's your proof that she's been practicing.)

E! News reports that Pippa has been hitting up Grace Belgravia, a London-based wellness center and fitness facility clearly designed for fancy people. Looks like your locker room, right?

Time to work off that cake and champagne. #gym #workout #friday #gracebelgravia #letsdothis

Most notably, the standard Grace Bridal Membership package includes access to group yoga, Pilates, stretching, indoor cycling, cardio, dance, and meditation classes at Grace Belgravia, plus a personal-training session. A representative from Grace Belgravia declined to comment to Cosmopolitan.com on whether Pippa attended these classes.

3. She may have received personal training almost every day.

Grace Belgravia personal-training sessions cost between 70 and 90 British pounds ($91 to $117 USD), depending on your package.

4. She reportedly went to Pilates.

On Wednesday in April at noon, an eyewitness saw Pippa entering KX Gym, a private health club in London, reportedly on her way to a 75-minute Pilates class, according to E! News. (KX doesn't currently list this class time on its schedule, but hey, sounds like a hell of a workout!)

Although KX offers both reformer and mat-based Pilates classes, plus personal Pilates training sessions, the gym also has a spa and a restaurant. So who really knows what Pippa was actually up to in there?

Pippa's Pilates obsession isn't new—she's been a fan of the workout since before her sister's 2011 wedding, when reports surfaced of her training with Margot Campbell, a London-based Pilates instructor. It's unclear whether Pippa has done Pilates with Margot since, but Pippa was pretty stoked with the results at the time: "Over the past few months I have noticed a huge difference in my core strength and posture," Pippa wrote in a testimonial on Margot Campbell's website. "From breathing techniques, muscle toning to overall flexibility and relaxation, my Pilates sessions have become something of a weekly necessity that keeps me fit, happy, and energized."

6. She *may* have gotten a leg-bandaging mud treatment.

Also known as the "Capri Palace Leg School treatment," this would have come with the Grace Belgravia bridal package Pippa got, as reported by E! News.

Because a representative from Grace Belgravia declined to confirm whether Pippa was a client and which services she received, no one is saying Pippa definitely received this treatment. If she did, though, it would have involved mud packs with cold bandaging, hot and cold hydrotherapy, and stone massage. FWIW, it's designed to improve blood circulation and boost your metabolism, reduce cellulite, tighten the skin, and reduce the appearance of veins and capillaries for smoother-looking legs, according to Grace Belgravia's website. Unless Pippa bucks tradition by wearing a leggy cocktail dress instead of a wedding gown, all bets are off on whether this sort of thing actually works.

7. She reportedly gave up wine.

An unnamed source told E! News that Pippa hasn't had a glass of wine in months. While that'd be no thang for a teetotaler, it was probably more difficult for Pippa—not only does she appear to like wine, she really knows her stuff: She's reportedly been certified by several wine-governing bodies—Grape Experience Wine & Spirit School in 2014, and Wine & Spirit Education Trust in 2015—for her mastery on topics like grape-growing and wine-making. (Bet the wine at her wedding will be A++.)