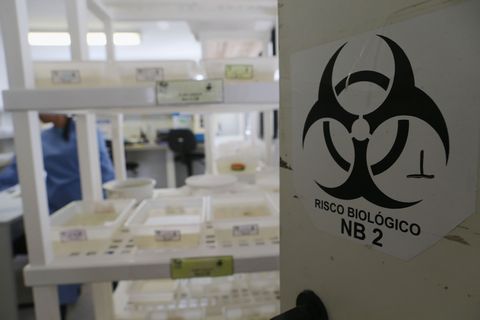 The first known case of the Zika virus spreading through sexual contact in the U.S. was reported in Texas on Monday, one day after the World Health Organization called Zika a "public health emergency." The case in Dallas County also marks the first local transmission of Zika, meaning it's the first time someone caught the virus in the U.S., not while traveling abroad.

According to the Center for Disease Control, the person was infected with Zika after having sexual contact with someone who had returned from a country where the disease is present. Dallas County health officials said the country was Venezuela. There have been no reports of the disease spreading by mosquito in Dallas County.

People can get Zika through mosquitoes and sexual contact. Symptoms of the virus are usually mild—fever, joint pain, rash, and red eyes lasting for a few days—but it's been linked to a devastating birth defect called microcephaly, in which babies are born with abnormally small heads and underdeveloped brains. There's currently no treatment for Zika, which has been reported in 23 countries, according to The New York Times.

"Now that we know Zika virus can be transmitted through sex, this increases our awareness campaign in educating the public about protecting themselves and others," Zachary Thompson, director of Dallas County Health and Human Services, said in a statement. "Next to abstinence, condoms are the best prevention method against any sexually transmitted infections."

Zika is spreading rapidly in South America—WHO officials say it could infect 4 million people, according to Reuters—which has coincided with an uptick in the number of microcephaly cases. The CDC has said more research needs to be done to conclusively prove a link between Zika and microcephaly.

Meanwhile, U.S. officials have told pregnant women and those looking to get pregnant to take precautions against Zika. The CDC, for example, has advised pregnant women not to travel to countries where the disease is prevalent. South American authorities have taken more serious measures: Officials in El Salvador told women to avoid getting pregnant until 2018, while Brazil and Colombia have advised women to put off pregnancy for at least several months.