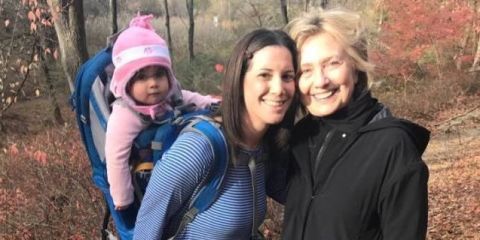 Those disappointed by the outcome of Tuesday's election have dealt with it in a multitude of ways, from Jennifer Lawrence urging those dispirited by Donald Trump's victory to let the loss "motivate" and "enrage" them to thousands of people gathering to protest across the United States.

Some have responded to the news more quietly. Take White Plains resident Margot Gerster. Upset by the election outcome, Gerster decided to take a hike at one of her favorite spots, and came across an unexpected fellow traveler: Hillary Clinton.

I've been feeling so heartbroken since yesterday's election and decided what better way to relax than take my girls hiking. So I decided to take them to one of favorite places in Chappaqua. We were the only ones there and it was so beautiful and relaxing. As we were leaving, I heard a bit of rustling coming towards me and as I stepped into the clearing there she was, Hillary Clinton and Bill with their dogs doing exactly the same thing as I was. I got to hug her and talk to her and tell her that one of my most proudest moments as a mother was taking Phoebe with me to vote for her. She hugged me and thanked me and we exchanged some sweet pleasantries and then I let them continue their walk. Now, I'm not one for signs but I think ill definitely take this one. So proud.

Many people are struggling with the news that Donald Trump is going to be the next president of the United States. Seeing Clinton herself, though, seeming relaxed and happy after a long, grueling campaign, is bound to soothe any election-sore soul.