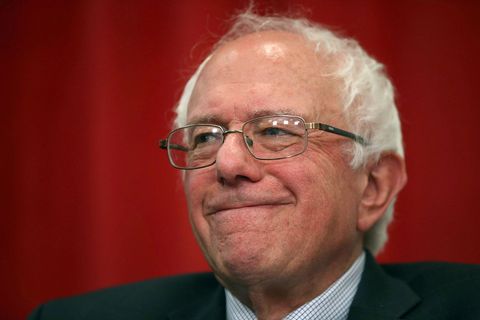 Donald Trump, man who apparently never needs to pee, recently came under fire for comments he made about Hillary Clinton's bathroom break during the Democratic Debate. "I know where she went," Trump said. "It's disgusting. I don't want to talk about it."

While you might think Trump's extreme distrust of human bodily functions isn't worthy of headlines, Bernie Sanders' thoughts about Trump's less-than-impressive attitude toward women are a must-read.

"I don't know what his relationship with women has been like, but he has discovered that women go to the bathroom, and it's very upsetting for him," Bernie reportedly said at a campaign stop in Council Bluffs, Iowa. "This is a guy who wants to be president of the United States. He must have a very unusual relationship with women."

Obviously, both men and women use the bathroom, which brings us to Bernie's big reveal. Turns out he also peaced out to the restroom during the debate. "I've got to be honest with you. I've got to lay it out on the table: I also went to the bathroom," Bernie said. "I guess other men are allowed to go to the bathroom, but women, what can we say?"

If Donald Trump can't handle the thought of women peeing, god knows what we're in for when he discovers what periods are.

Mehera Bonner Contributor Mehera Bonner is a news writer who focuses on celebrities and royals.
This content is created and maintained by a third party, and imported onto this page to help users provide their email addresses. You may be able to find more information about this and similar content at piano.io
Advertisement - Continue Reading Below
More From Politics
Want to Help Moms? Prioritize Menstrual Equity
Abortion Rights Start at the State Level
Advertisement - Continue Reading Below
All of Your Abortion Questions Answered
The Texas Abortion Snitch Site Is Having a Bad Day
The Future of Afghan Women Depends on Us
How You Can Help People in Afghanistan
Andrew Cuomo Has Resigned as NY Governor
Gwen Berry: Athlete, Activist, Olympian
The Anti-Choice Endgame: Power And Control
Give Domestic Workers the Protections They Deserve