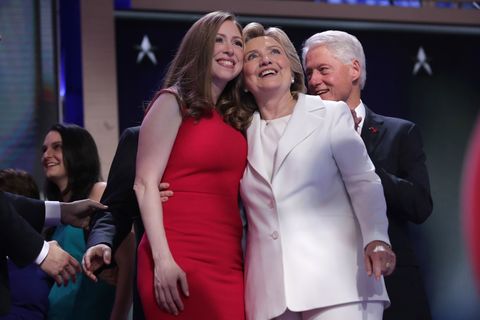 Before the balloons fell and everybody cavorted amongst them like it was the inauguration and they'd already won—because, in a way, they already *had*—Chelsea Clinton gave a speech that made Hillary look like this at a TV screen.

Describing her mom as "wonderful, thoughtful, and hilarious" and "always there" for her, Clinton peppered her graceful address with anecdotes about the daily notes Hillary would leave for her to open while she was away on work trips or that time she fell down, and Hillary picked her up and read her Goodnight Moon. [Editor]

"Regardless of what was happening in her life, she was always, always there for me.” —@ChelseaClinton https://t.co/nuIjrwZC1M

So proud. So very proud indeed.

Mom, I love you, I am so proud of you & I am grateful every single day you're my mom. It meant so much to be able to tell the country why.

Chelsea Peng I'm Chelsea Peng, the assistant editor at MarieClaire.com.
Advertisement - Continue Reading Below
More From Politics
Mayor Pete's Husband Would Be a "First Gentleman"
How a Parkland Mom Turned Her Grief into Action
Advertisement - Continue Reading Below
He Voted for Trump. She Voted for Bernie.
How Guerrilla Feminists Are Fighting Femicide
Who Was Mayor Pete's Father, Joseph Buttigieg?
Everything We Know About Senator Warren's Husband
Nancy Pelosi, Icon, Ripped Up Trump's SOTU Address
Thoughts From a First-Time Caucus-Goer
And Now, a Word From the Future Voters of Iowa
Ayanna Pressley Wants Total Justice for Survivors