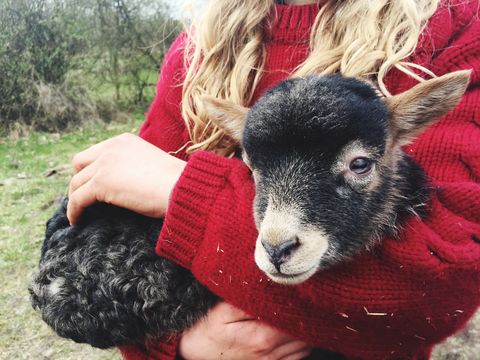 Humans have been raising goats for 10,000 years, but all of a sudden they’re everywhere: cutting the grass at Google headquarters, doing yoga with Khloé Kardashian, wandering onto subway tracks and getting rescued by Jon Stewart, and wearing duck costumes while sleeping in shopping carts. (That would be Polly, one of the special-needs goats featured on @goatsofanarchy.)

The beauty world is obsessed too. Celebrity aestheticians Kate Somerville and Angela Caglia both make moisturizers with goat’s milk. And the adorable domesticated descendants of the ibex are the star attraction at Sharon Springs, New York, farm of Brent Ridge and Josh Kilmer-Purcell, founders of the Beekman 1802 brand.

The Best of Goat-Milk Beauty

It’s autumn, and the couple—no slouches themselves, winning The Amazing Race in 2012—have invited me for a harvest dinner on the lawn of their Georgian-Federal mansion, which was built for state senator William Beekman in 1802 (hence the company name). Ridge is trying to explain how they started making soap in 2009 after losing their corporate jobs in New York City, but the livestock keep interrupting. At the moment, the entire herd is bleating and running frantically around their nearby pen. Ridge looks over his shoulder. “One of them probably stepped on a branch and scared herself,” says Ridge. “They’re such divas.”

They’re Internet-famous too. “Do not get me started on the goat cam,” says Ridge, laughing. The couple installed a camera in their barn in 2014, and fans are hooked on the 24/7 live stream. “If one of them lies down too long, people call customer service freaking out. One time someone sent out the local police to check on a goat because they thought it was dead.”

Didn’t I tell you goats were popular?

Related Story
This Story About 100 Loose Goats is the G.O.A.T.

The obsession is justifiable: Their milk is loaded with lactic acid, a dermatological wonder that gently exfoliates, can help reduce signs of aging like spots and sallowness, and can increase skin’s ability to retain moisture. Small farms all over New York make soap with it, and in winter, when farmers’ markets are almost bare, you can still find booths selling versions from local purveyors like Harper Hill Farm, Shamrock Creek Farms, and Alpine Made. The ingredient has even caught on in Korea, where brands like TonyMoly and Daycell use it in moisturizers. But Beekman 1802’s goat’s-milk beauty range is extensive, with more than a hundred products. Its first creation, a fragrance-free soap the founders used to hand-wrap in the foyer of their house, is still one of the most popular. “People with sensitive skin love it,” says Ridge.

A few of the goats on the Beekman 1802 farm. Their milk is used to make the company's best-selling skincare products.
Courtesy

As he and Kilmer-Purcell clear away dinner, they tell me they’re always dreaming up new ideas for their brand, which now include quarterly magazines, home goods, furniture, and more. As if to prove the point, Kilmer-Purcell brings out dessert, a homemade hazelenut-apple tart with pear caramel accompanied by chèvre, a wheel of their ash-coated “Blaak” goat cheese, and stoneware cups with a digestif. What are we drinking? Beekman 1802 goat’s-milk stout, naturally.

This story appears in the Holiday 2018 issue of Marie Claire.

Jennifer G. Sullivan Jennifer Goldstein is the beauty & health director of Marie Claire and co-host of the award-winning beauty podcast Fat Mascara.
This content is created and maintained by a third party, and imported onto this page to help users provide their email addresses. You may be able to find more information about this and similar content at piano.io
Advertisement - Continue Reading Below
More From Beauty
Fierce Red Box Braids Styles to Try Right Now
19 Super Pretty Valentine's Day Makeup Tutorials
Advertisement - Continue Reading Below
Dazzling Makeup Looks From the Spring Runways
Michelle Obama's MUA Talks Her Inauguration Look
24 Hours With Nail Artist Naomi Yasuda
You Need This Kamala Harris-Inspired Lipstick
Acne Scars Are No Match For These Cult Products
Lengthening Mascaras for Your Longest Lashes Ever
Why Resoré's Body Towel Is Worth It
The Best Supplements for Glowing Skin