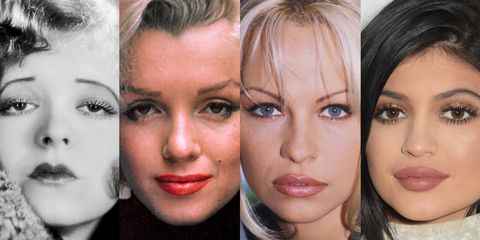 Getty Images
Kylie Jenner may have introduced the overdrawing lip technique to a whole new generation, but believe us when we tell you: it's an old school trick. As far back as the 1920's and through the decades that followed, ladies were using liner pencils to create the illusion of fuller lips. Here, get schooled in the art of exaggeration by 10 of our favorite faux bee-stung pouts.
Getty Images
1 of 10
Clara Bow, 1928

In the '20s there was no pout more famous than that of the silent screen star. Bow would overdraw her lips in a bold, heart-shaped cupid's bow on and off screen.

Considering Dietrich would go so far as to use surgical tape to give her a temporary face lift, it should come as know surprise that she liked to amp up her lips. She would overdraw her her pout, then fill in the lips with a lighter lipstick for dimension.

Famous for her signature red pout, Marilyn Monroe is practically the queen of overdrawing. Her lip contouring method (which we tried here) consisted of applying darker reds on the outer corners and lighter hues brushed on the middle of the lips.

Hepburn always has a beauty trick up her sleeve. To enhance her pout, she'd overdraw her top lip so that it exceeded the bottom. And because she's Audrey Hepburn, it never veered into clown territory.

Bardot's signature nude lip wouldn't haven been nearly as striking without the slightly darker nude pencil she used to trace around her lips. (Note: We're so obsessed with Charlotte Tilbury's Bardot Beige).

Campbell has naturally full lips, this is for certain. But in the '90s, she liked to emphasize them even more with a dark brown lip color applied beyond the natural borders of her lips. The rest of her kisser? All natural.

A lip liner enthusiast to this day, Anderson has effectively enlarged lips throughout her career (but especially in the '90s) with a dark red pencil and soft pink lips.

Halliwell was well-versed in the art of dark lip liner. She had no qualms about an obvious application, extending her lips with thick, matte etches.

Like her fellow Spice Girl and practically every woman in the '90s, Beckham would opt for a creamy, raison-hued lip, using liner a few shades darker to exaggerate the size and shape of her pout.

These days, Jenner accentuates her pillowy pout by way of the '90s. But instead of a perceptible lipline, she overdraws them (particularly her top lip), then goes full-on matte with a grungy brown or brick red.

Next
What's the New "It" Hair? 4 Experts Weigh In 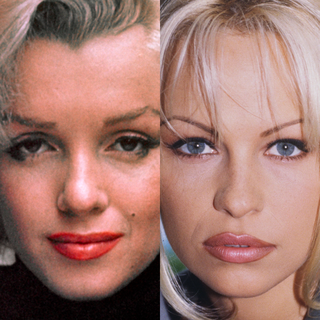 Advertisement - Continue Reading Below
Lauren Valenti Associate Web Editor I’m the associate web editor at Marie Claire.
This content is created and maintained by a third party, and imported onto this page to help users provide their email addresses. You may be able to find more information about this and similar content at piano.io
More From Beauty
Hair Glosses That Promise the Ultimate Finish
Selena Gomez Just Went Platinum Blonde
Advertisement - Continue Reading Below
The Only Waterproof Eyeliners You'll Ever Need
Beauty Inside and Out with Harry Josh
AMEN Uses Mushrooms As Their Candle Packaging
Give Your Skin a Hydrating Pick-Me-Up With a Mist
Found: Face Washes That Work Miracles on Acne
The Editor-Approved Curly Hair Products You Need
Give Your Skin a Shot of Moisture With This Serum
Our Favorite Perfumes of the Year (So Far)