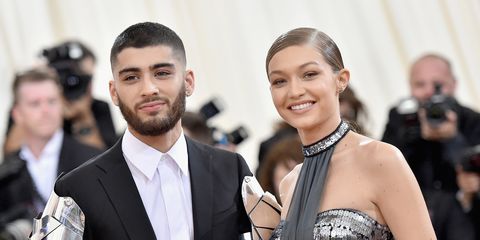 The world was extremely surprised when Gigi Hadid and Zayn Malik called time on their relationship. And while Malik has posted a copious number of sad and brooding Instagrams since the split, Hadid has stayed relatively quiet, until now.

Hadid posted an emotional Instagram photo today, sending a message to a person that she's missing a lot. And while it isn't directed at Malik, it's clear that Hadid needs the support of her family now more than ever.

Hadid captioned the sweet photo, "miss u sister," which showed her riding in the back of a car alongside fellow model Bella, both wearing flawless outfits as per usual.

It's likely that Hadid is missing her younger sister, Bella, so much because Bello is on a trip to Shanghai right now. In a series of Instagram posts and Instagram Stories, Bella Hadid showcased some of the most exciting moments from her trip, which sees her promoting Dior Makeup:

But the trip wasn't all work. Bella also managed to get some sightseeing in too:

And she even had time to do a face mask, while sipping coffee, presumably on the flight there:

Even though Malik has been pretty active on social media since his split from Gigi was announced, the majority of his posts have seemed maudlin:

Announcing the split on Twitter, after the news of their breakup came out, Malik wrote,

"Gigi and I had an incredibly meaningful, loving, and fun relationship and I have a huge amount of respect and adoration for Gigi as a woman and a friend. She has such an incredible soul. I'm grateful to all of our fans for respecting this difficult decision and our privacy at this time, we wish this news could have came from us first. We love you all. xZ."

Related Story
Zayn Malik Just Posted the Saddest Instagrams
Amy Mackelden Amy Mackelden is a freelance writer, editor, and disability activist.
This content is created and maintained by a third party, and imported onto this page to help users provide their email addresses. You may be able to find more information about this and similar content at piano.io
Advertisement - Continue Reading Below
More From Celebrity
Serena Gave Daughter Olympia a Tennis Lesson
Meghan Shared What Helped Her Through 2020
Advertisement - Continue Reading Below
Kylie and Travis Are "Very Close" After Reuniting
Meghan's Book 'The Bench' Tops Best Sellers List
Kaavia Talks to a Bee in an Adorable IG Video
David Harbour on Being Stepdad to Lily Allen's Kid
Ben Affleck Is "Getting to Know" J.Lo's Kids
Salma Hayek's Owl Had a Mishap With Harry Styles
Princess Diana Always Dreamed in Living in Cali
Angelina Jolie Was Spotted Leaving Her Ex's Place