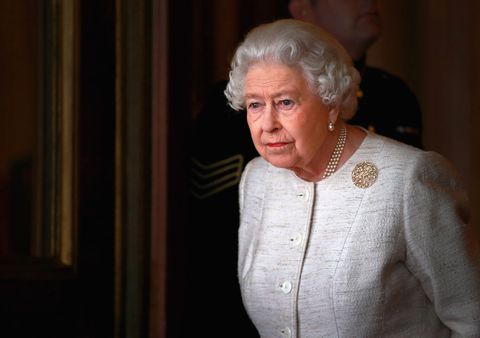 The 92-year-old monarch was scheduled to attend a special church service to mark the bicentenary of an order of chivalry, according to People.

"The Queen is feeling under the weather today and has decided not to attend this morning’s service at St. Paul’s Cathedral marking the 200th anniversary of the Order of St. Michael and St. George," the palace said in a statement. "Her Majesty will be represented by [her cousin] The Duke of Kent as Grand Master of the Order."

Don't freak out though: A source close to the royals told People that Elizabeth hasn't called in a doctor and is still planning to travel to Windsor Castle later today.

The Queen has cut back a little on her royal engagements in recent years, delegating more of her work to her grandsons, Prince William and Prince Harry, and their wives, Kate Middleton and Meghan Markle, but she's still a very active presence at royal events.

Specifically, royal fans have been obsessed with Her Majesty's recent outings with new granddaughter-in-law Meghan. Meeting any in-law would be stressful, but literal royalty? Absolutely nerve-wracking to mere mortals like most of us, but sources have said that Meghan is already "completely at ease with the queen."

The Queen looked in especially good spirits when she attended the opening of Mersey Gateway Bridge with Meghan. The duo were photographed giggling like lifelong BFFs all throughout the event.

Kayleigh Roberts Contributor Kayleigh Roberts is the weekend editor at Marie Claire, covering celebrity and entertainment news, from actual royals like Kate Middleton and Meghan Markle to Hollywood royalty, like Katie Holmes and Chrissy Teigen.
This content is created and maintained by a third party, and imported onto this page to help users provide their email addresses. You may be able to find more information about this and similar content at piano.io
Advertisement - Continue Reading Below
More From Celebrity
Harry Back With Will & Kate at Philip's Funeral
How Prince Harry and Meghan Honored Philip Today
Advertisement - Continue Reading Below
40 Celeb Exes Who Worked Together After a Breakup
Iconic Party Photos From the Past
The Best TV and Movie Wedding Dresses of All Time
47 'Friends' Facts Every Superfan Should Know
A Look at Royal Family Portraits Through the Years
40 Rare Photos of Grace Kelly Through the Years