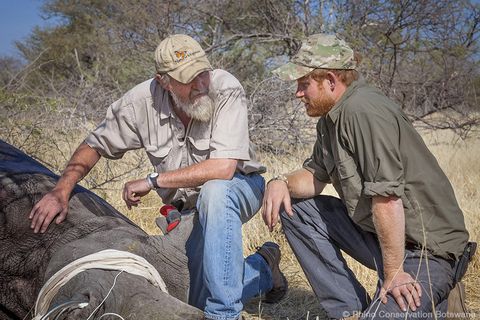 Prince Harry made an unannounced visit to Africa this week, and he did not bring along Meghan Markle this time. Though the couple has spent lots of time in Africa—most famously for their third date—this was a working trip for Harry, and like most people who travel for business, he didn't bring his spouse.

“The Duke of Sussex is on a private working trip to Botswana, to join the annual general meeting for Rhino Conservation Botswana in his capacity as patron," Kensington Palace said in a statement to ITV. “He attended the board meeting in Maun and an RCB community project in Xarakao village.”

Royal correspondent Omid Scobie noted on Twitter that this is the second time this year Harry has visited the Southern African country to care for the animals. The Duke serves as a patron Rhino Conservation Botswana, an organization that works to increase and protect populations of black and white rhinos.

Great to see Prince Harry back in Maun, Botswana, in his role as patron of @RhinosBotswana (second time this year).
Earlier this week Harry was with RCB director Map Ives in the Okavango Delta, where in 2016 he helped fit tracking devices to relocated endangered black rhinos🦏 pic.twitter.com/d5XszGcjSX

In 2015, Harry told Town and Country what an African trip with him is really like. "I don't go on safari," he said. "I come so I can surround myself with people [working in conservation] and support them."

Although this was a solo trip for Harry, Botswana is a place where he and Meghan have shared many fond memories before. Harry reminisced on some of those moments in the couple's first joint interview with the BBC after their engagement in November.

"We camped out with each other under the stars," he said. "She came and joined me for five days out there, which was absolutely fantastic. So then we were really by ourselves, which was crucial to me to make sure that we had a chance to know each other.”