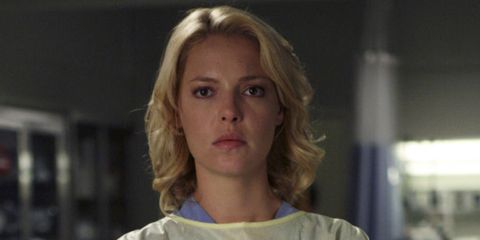 Before we talk about any other aspect of Thursday's episode of Grey's Anatomy, can we acknowledge the fact that it's extremely weird to see Alex Karev working in the clinic? I'm not saying it's beneath him as a surgeon or anything. I actually really liked it when the residents used to rotate through the clinic on a regular basis because of the opportunity it gave the show to create unique patient stories. What's weird about seeing Alex there is that it's so clearly Izzie's clinic. There was a long stretch there where Grey's wanted us to completely forget about Izzie, but she's been nudged back into the narrative several times in the past year, all of which makes me wonder: Is she coming back? We've been told that this is going to be a huge season for Alex — nothing's huger than an Izzie return, and there's no better way to bring Alex full circle. I'm not advocating for them to get back together, but I'd love an actual conversation between the two of them. And, yeah, I know it's a stretch, but Shonda dislikes Patrick Dempsey more than she dislikes Katherine Heigl these days, so it no longer seems completely impossible.

Real talk: The fact that I spent so much of the episode obsessing over this possibility might have something to do with the fact that it was very slow.

Alex is, of course, miserable in the clinic, especially because Nurse Tamir is up his ass, and because Alex can't even do simple surgical procedures like lancing a boil. (The close-up shot of that boil marks the first time this season of Grey's has made me gag out loud.) He's assigned a patient named Emma, who has the symptoms of a hangover even though she claims to have only had one beer. She wants an IV; Alex wants to do an intervention. He even enlists Webber for a little good cop/bad cop, but Emma refuses to listen. When Webber (gently) grabs her arm to try to get her to stay put, her shoulder dislocates. Alex puts her symptoms together and diagnoses her with Ehlers-Danlos syndrome, but Emma still thinks he's an asshat and Webber's a hero…and sticking around to make sure Emma's properly diagnosed means Alex misses an important meeting with his lawyers. I try to suspend disbelief as much as I possibly can while watching Grey's (trying to assign logic to this show never ended well for anyone) but honestly: None of the other ACTUAL DOZENS of doctors Alex knew was willing to cover an hour or two in the clinic for him? Like, four weeks from now, is Arizona going to have to say to herself, "I'm sad my friend is in jail, but I really, really didn't want to do any scut work."

Of course, Alex isn't the only one struggling. Owen and Amelia are realizing they don't really know each other at all, a discovery sparked by Owen's admission that he regularly goes to church and Amelia's panic about what they're going to teach their kids about god and the afterlife. (Yes, fine, but we just watched Jackson and April have this fight like a year ago.) In the elevator with Meredith, given 30 seconds to vent, Owen talks about how relentless Amelia is. "She just gets an idea in her head and won't let go!" Yeah, pal. So did Teddy. So did Cristina. Congratulations, you have a type. Amelia's right, though: They don't know enough about one another, and there were conversations that they absolutely should have had before they decided to get married. I worry! And while it was very sweet to see Owen open up about choking Cristina during a PTSD episode and Amelia explain the death of her ex, that's just a start. I can't get my head around Owen and Amelia deciding to immediately get pregnant now that they've shared one secret apiece.

Also, take this with a grain of salt, given how resistant I am to change on Grey's (it tends to take me between one and seven years to fully open my heart to a new cast member), but are the new sets getting to anyone else? It just looks wrong, and not just because there's far too much outdoor space for a hospital in Seattle.

Meanwhile, Jackson and April are exhausted and irritated with each other, but want to keep living together anyway. That's it. That's the entire story. I'd be crankier about it if it didn't represent some actual growth between the two of them — they're finding a way to be honest and compromise that they couldn't when they were married to each other. And DeLuca's back and in one piece, but Bailey forbids him to talk about the case with anyone from the hospital, which means that he and Jo start doing so basically immediately.

And then there are poor Meredith and Riggs and, actually, "poor" isn't fair — Meredith is the victim of nothing here but her own choices. She wants to date Riggs. She should tell Maggie. Maggie can respond however she wants to. SIMPLE. Instead, the weird tension between Meredith and Riggs leads them to fight really intensely over a patient. And so an episode that began with Riggs asking to hang out with Meredith outside the hospital ("I don't hang out" is just about the most Meredith Grey line ever uttered) ends with Meredith telling him they're going to have to settle for being colleagues. "Sounds stuffy," he says. Fair point, Riggs. But then it was a pretty stuffy episode.