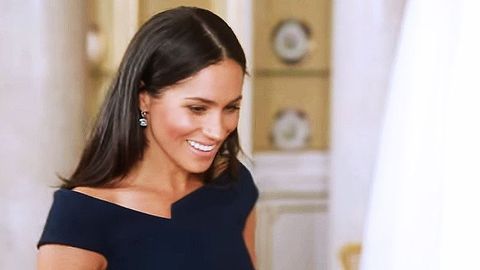 It's been four months since Meghan Markle married Prince Harry in a huge royal to-do at Windsor Castle, wearing a gorgeous custom Givenchy gown and an intricate hand-made veil. Since then, she's made plenty of royal appearances with her husband and his family, but for the first time since the big day, the Duchess of Sussex is giving an official interview—in honor of the Queen, of course.

A few weeks ago it was announced that Meghan, along with Harry, Prince William, will be featured in a new documentary titled Queen of the World, which will give an intimate look into the lives of the Queen and the royal family. "Offering a unique insight into Her Majesty The Queen's role as a figure on the global stage, this landmark series tells the story of how the Commonwealth has been a central focus and passion throughout Her Majesty's life," according to ITV.

A sneak peek of the doc has just been released, and this first look includes a scene with Meghan Markle talking about (and touching!) her silk tulle wedding veil which was hand-embroidered with flowers that represent the commonwealth. "Ms. Markle expressed the wish of having all 53 countries of the Commonwealth with her on her journey through the ceremony," Kensington Palace announced. "Ms. Waight Keller designed a veil representing the distinctive flora of each Commonwealth country united in one spectacular floral composition."

"Fifty-three countries, oh my goodness," The Duchess can be heard saying in the doc. "It will keep us busy."

For the appearance, Meghan wore the same navy Roland Mouret dress she was spotted in when she had tea with her mother and the Queen the day before her wedding. Given the fact that they're discussing her wedding look and she's wearing the same outfit, chances are this was filmed the day before the royal wedding. Which...do you see how calm she seems in that shot?! #Queen.

The dress is still available, if you're interested in buying the perfect thing to wear to tea with the Queen and for an official royal interview:

Queen of the World airs on ITV on September 25 and HBO on October 1.

Related Stories
Harry and Meghan's Children Will Use This Surname
An Obsessive Timeline of Harry and Meghan
Heartbreak Bonded Meghan Markle and Prince Harry
Sally Holmes Editor in Chief Sally is the Editor in Chief of Marie Claire where she oversees coverage of all the things the Marie Claire reader wants to know about, including politics, beauty, fashion, and celebs.
This content is created and maintained by a third party, and imported onto this page to help users provide their email addresses. You may be able to find more information about this and similar content at piano.io
Advertisement - Continue Reading Below
More From The Ultimate Guide to the Royal Family
Will and Kate Attend the ‘No Time to Die’ Premiere
Harry Carries Briefcase That Reads "Archie's Papa"
Advertisement - Continue Reading Below
Meghan Markle and Prince Harry Arrive in NYC
Princess Beatrice Has Given Birth to a Baby Girl
How Meghan & Harry Spent Their 2-Year Anniversary
Charlotte Has Two Major Milestones Coming Up
Kate Made a Very Common Shoe Shopping Mistake
The Queen Is Lawyering Up, Apparently
Harry & Meghan Are Still Close to the Queen, TYVM
Archie Inspired Harry and Meghan to Take a Stand