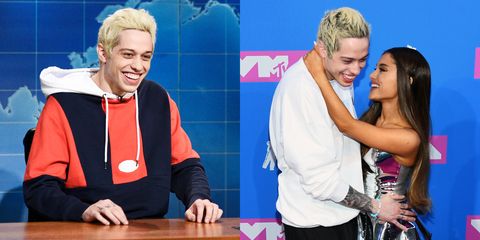 Saturday Night Live returned last night for its 44th season and there was an elephant in the room waiting to be addressed. No, not just the trash fire that is the Brett Kavanaugh situation (although, the long-running sketch comedy series wasted no time addressing that one too, in a pitch perfect cold open starring Matt Damon, in a surprise appearance).

Related Story
Every Tattoo Ariana Grande Has Gotten for Pete

SNL's own Pete Davidson made headlines all summer for his whirlwind relationship with (and very fast engagement to) singer Ariana Grande. Considering the media attention the coupling attracted, SNL couldn't not address it. And they did. Several times. In case you missed the premiere or just want to relive the name-dropping and meaningful winks, here's a quick guide to every time Pete mentioned or alluded to Ariana during the premiere (on which she was originally scheduled as musical guest, before pulling out citing "emotional reasons").

Even though Matt Damon's appearance on SNL has been dominating headlines about the premiere, the host was actually Adam Driver (of Girls and Star Wars fame). During Driver's opening monologue, he asked members of the SNL cast about their summer breaks. Everyone answered with a variation of "I worked a little, traveled a little." Boring, standard answer. When it was Pete's turn, however, he answered with a coy, "You don't wanna hear about my summer."

Adam pressed the issue, saying, "No. Actually, you're the one person whose summer I actually want to hear about." Pete's response? A meaning-laden wink. Don't worry, this was but a tease for the Ariana gos that was to come.

During a sketch about Kyle Mooney trying to finally become famous:

Later in the show, Kyle Mooney took centerstage in a sketch that was basically just about him trying to become more well-known. He decides to copy the Pete Davidson model for immense fame, dying his hair to look like Pete and getting a celebrity girlfriend of his own (Wendy Williams).

The bulk of the Ariana Grande content came during Weekend Update, however, when Pete sat down as himself to discuss the high-profile relationship.

"I got engaged and no one could believe it," Pete said of the engagement. "I can't believe it and I get it. She's number one pop star in the world and I'm that guy from SNL everyone thinks is in desperate need of more blood."

When asked if he and Ariana plan to have a prenup, Pete answered with a great mix of humor and genuine support for his wildly-successful fiancée.

"Obviously I wanted one. So God forbid we split up and she takes half my sneakers?" he joked before getting (more) serious. "No, look, I'm totally comfortable being with a successful woman. I think it's dope. I live at her place. She pays 60 grand for rent and all I have to do is stock the fridge."